She left her ‘harp’ at Mason 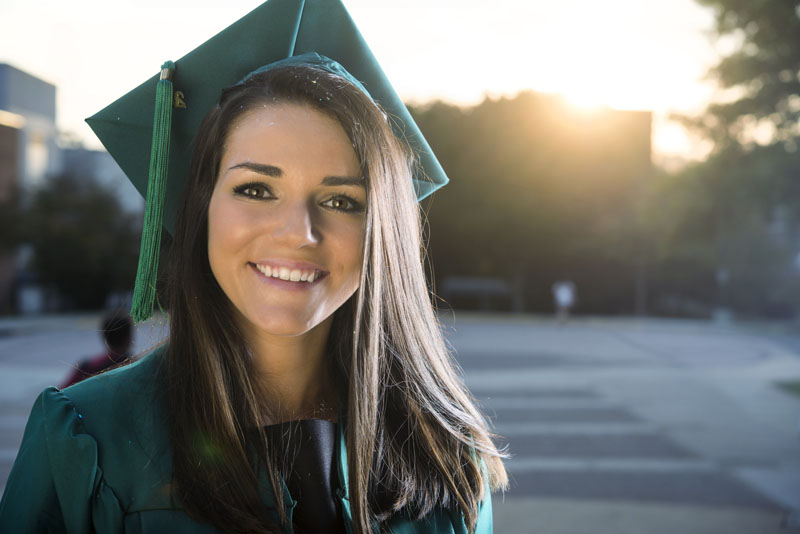 She’s known around campus as “Harp Girl.” Even off campus, she’s known for her string strumming on the lime green electric harp as part of the Green Machine pep band.

A complete stranger in a different time zone saw her play on ESPN, claimed he was in love and then promptly sent her a map to his location.

It was all a bit of a fluke how Gray became the first and only electric harp player in the history of George Mason’s high-touted pep band, led by Mason professor Michael “Doc Nix” Nickens.

Nickens saw her with her acoustic harp and the wheels in his brain started turning; he wondered how he could incorporate a harp into a pep band, she said. 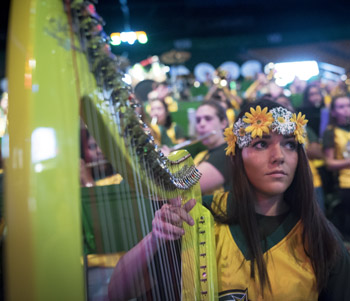 Soon, she and her harp were on the arena floor at Mason Madness, playing along with the rest of the band, Gray said.

“It was this big old acoustic harp—it was crazy,” she said. “We had to think of ways to get the harp on the floor without damaging it.”

Nickens and Jeremy Freer, associate director of Green Machine Ensembles, later did some research and replaced her harp with the custom-made, lime green electric one Gray is known for.

“They can turn me up or turn me down,” she said of the instrument. “You want it all to blend and sound good. you don’t want it to overpower the other instruments. It’s all about balance.”

Led Zeppelin’s “Stairway to Heaven” has been added to the band’s repertoire primarily as a piece to showcase the harp, she said.

“We just got the sheet music last week. They realized it was my last semester as a student,” Gray said.

Aerosmith’s “Dream On” has become somewhat of a “harp anthem,” because of the musical arrangement the band plays, she said.

Aside from music, Mason is also where she found her calling as public relations guru.

She was one of only 200 campus representatives in the country for Victoria’s Secret Pink, the company’s wildly successful line of lounge and workout wear for teens and young adults.

Though she’s known for playing the harp, Gray said she’s going to work for a Northern Virginia public relations firm after graduation, thanks to one of her Mason classes.

The owner of the company visited her COMM 331 Advanced Principles in Public Relations class and offered her an internship.

“I wasn’t really looking for an internship, but it kind of just happened,” she said.

The company went on to hire her as a full-time account executive, a position she’ll begin in January.

“It’s perfect! I get to stay in the area and continue to play in the band, while working full time,” she said.