Message from President Cabrera on the passing of Roger Wilkins

This week, we lost one of our brightest stars. I’m saddened by the news that retired Robinson Professor Roger Wilkins has died.

Wilkins’ life was the kind of story you couldn’t possibly imagine. He was a champion of the civil rights movement who served Presidents John F. Kennedy and Lyndon B. Johnson. His work contributed to the passage of the Civil Rights Act of 1964 and the Voting Rights Act of 1965.

Later on, he was among the first black editorial writers at both The Washington Post and The New York Times. His editorials about the Watergate scandal earned him a share of the Post’s 1973 Pulitzer Prize for public service, his work cited alongside of the investigative stories written by Bob Woodward and Carl Bernstein.

We were fortunate to earn a place in his marvelous life. Wilkins spent nearly two decades teaching history and American culture at Mason, writing books and helping to put a then-fledgling university on the map.

His students spoke glowingly of his devotion to helping his fellow man. This passage from one of his students, written at the time of his retirement from Mason in 2007, captures his impact:

“Students who have taken his classes or spoken with him at length embark on their lives more enlightened and understanding of others because of him…. With his departure, Mason loses not only a professor, but a man with an enormous heart and the willingness to make the university as distinguished an academic institution as possible. He is irreplaceable.”

Please join me in sending our heartfelt condolences to his family and friends. 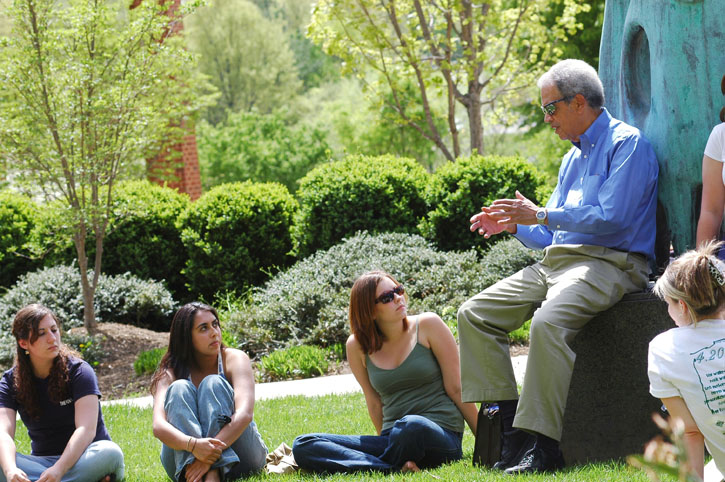 Roger Wilkins talks with students in this 2006 photo. File photo by Creative Services.