Molly Baldovin is the April 2017 Employee of the Month 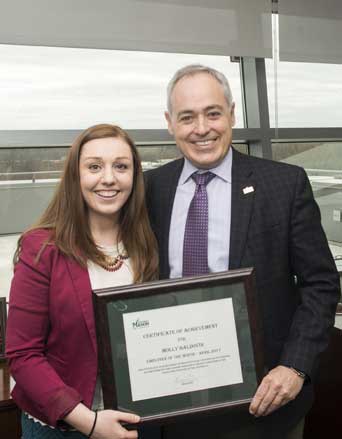 Balancing work with school can be tough. But Molly Baldovin, assistant to the director and marketing coordinator at the School of Music, proves that she can do both and has been named George Mason University’s April Employee of the Month.

Baldovin was nominated by Jim Carroll, professor of jazz studies at the School of Music, who describes her as “a credit to Mason and model employee.”

In both of her positions, Baldovin juggles a number of important responsibilities for the school, including scheduling for the director, purchasing, supervising student workers and updating the school’s website.

Yet somehow, she still has time to pursue a graduate degree in arts management at Mason. After serving as president of a dance club while an undergraduate at the University of Mary Washington, Baldovin said she became interested in the logistical management of the arts and wanted to pursue it as a career.

She said that her classwork can intermingle with her current position, particularly in the development of a biweekly newsletter for the school, and that one of her marketing classes helped her learn how to optimize the content for its target audience.

Linda Monson, director of the School of Music, said Baldovin is smart, energetic and one of the best assistants she could ever ask for.

“Molly exudes confidence and positivity in her attitude and in her work ethic,” Monson said. “She works hard and inspires others to give their best.”

Additionally, Baldovin assisted with the development of the School of Music’s website after it changed platforms. She learned how to transform it into a place that served the school’s mission, while picking up some web editing skills at the same time.

"Overhauling the School of Music website was both a professional accomplishment and a creative outlet. We started out as amateurs but can now work capably with the website,” Baldovin said.

“Without Molly, this project would not have been successful, and I can’t thank her enough for her dedication and professionalism,” Purcell said.

Baldovin said she is happy to work with people who are helpful and have a strong work ethic.

“It’s so nice to work in a place where what you do is appreciated and acknowledged,” she said.

Mason President Ángel Cabrera will present Baldovin with her award at 2 p.m. Monday, April 3, in his office on the fifth floor of Merten Hall. Her family, co-workers and friends are all encouraged to attend the ceremony. Those unable to attend can watch the Facebook livestream at www.facebook.com/workingatmason.