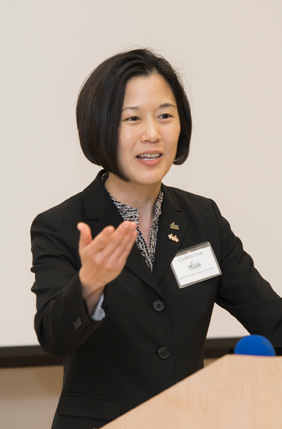 A lab at George Mason University will be used to help researchers understand and develop ways police can be more proactive in their efforts while improving relationships with the people they protect.

The Proactive Policing Lab, part of the Center for Evidence-Based Crime Policy at George Mason, opened in January and is led by criminology professors Christopher Koper and Cynthia Lum, a former Baltimore City police officer.

Research has generally shown that when police are more proactive, they can effectively reduce crime and improve citizen satisfaction. However, much more empirical knowledge is needed to measure and understand the extent to which police agencies use proactivity and the impact that proactivity has on crime, Lum said. The lab aims to do that.

Another goal is to help officers understand the consequences of variations of proactivity; some forms can lead to good things while others could lead to bad things.

“With ‘stop and frisk,’ we know it has had negative consequences when used in heavy-handed or illegal ways, especially within communities of color,” Lum said. “However, there are some limited cases where stop and frisk in areas with a high level of gun violence can be effective, and may be requested by the community.”

Lum cited her work in Baltimore as an example.

“The people there are just like anywhere else. They don’t want to go outside and be shot at or be afraid, but they also don’t want to be disrespected [by police].”

Police agencies are very good at measuring their reactive responses to 911 calls, or when they make an arrest, write a ticket or take a report of a crime, Lum said. However, they are often less able to measure when, how and how often officers are proactive, and the results of those actions.

Mason graduate students Xiaoyun Wu, William Johnson and Megan Stoltz are an integral part of the lab and will help tackle these questions through data analysis, systematic observations and interviews with the law enforcement officers in the field.

“It’s important to find out what the police [do] during their discretionary time and how that might be shaped to better prevent crime,” Wu said. “The proactivity lab fits great with my interest. It allows me to look at police activities closely and to really get to the nitty-gritty of police work.”

Lum and Koper are also partnering with Mason’s associate professor of statistics Guoqing Diao and graduate students in the Department of Statistics, as well as Daniel Nagin, a professor at Carnegie Mellon.

Partnering agencies include Fairfax County Police, Prince William County Police and Alexandria City Police. The lab also has connections with the Jacksonville, Fla., sheriff’s office and the Minneapolis Police Department. The lab is open to working with any law enforcement agency, Lum added.

The Laura and John Arnold Foundation gave the lab $350,000, which will fund operations for one year, but Lum would like to find a way to extend the lab several more years.

Lum said she’s motivated by what she sees as a bright future for policing.

“Police and communities can work together to create high-quality, democratic policing,” she said. “The scientific community plays a central role in this important goal.”