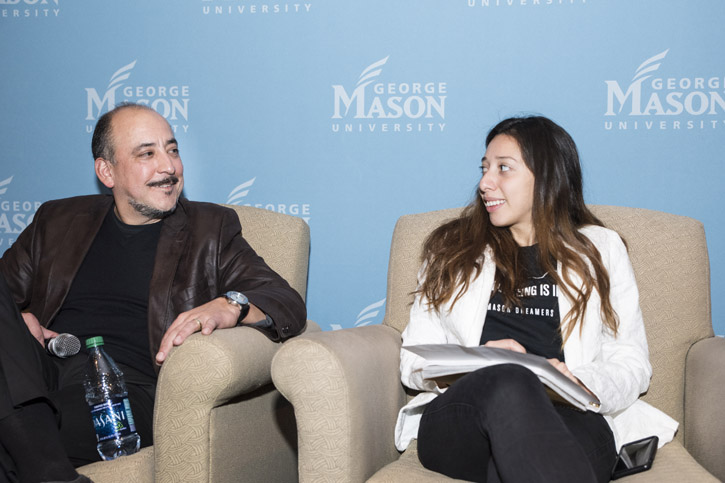 Aldo Bello, filmmaker, and Mason student Ana Tobar were among those who participated in a panel discussion Monday night about immigration laws. Photo by Ron Aira.

A four-member panel on Monday examined the fears of young, undocumented people, as well as the complexities of immigration laws and executive actions that keep their lives in the United States in limbo.

About 80 people from the George Mason and Fairfax communities attended “DACA, DAPA and Deportation: Defending Dreamers and Their Families, ” hosted by George Mason University’s Institute for Immigration Research. The event included a screening of the film “Dream: An American Story,” which follows the life of a young Colombian-born undocumented man living in the United States.

About 100 people also watched on Facebook Live, said Monica Gomez Issac, executive director of the Institute for Immigration Research and the moderator of Monday’s event.

Tobar said she became involved with the group Mason Dreamers after finding out many of her friends were undocumented.

Mason has more than 300 students who have gone on record as saying they are in the U.S. under DACA, that is, Deferred Action for Childhood Arrivals, which allows undocumented immigrants who entered the country as minors to receive a renewable two-year period of deferred action from deportation.

“I’ve become an ally for many of the students on campus,” said Tobar, the Mason Dreamers president. “We keep fighting and keep fighting, but I feel like there’s a push back every single time. It’s like how do [we] as students continue to keep fighting? … We’re just students.”

People like her, with legal status in the United States should speak up for those at risk of being deported, she said.

Others asked whether it is safe for students to still apply for DACA.

“We have been advising people that DACA as it stands still exists, that DACA is not the law, so it can disappear for one day to another,” Volpe said.

It also requires that the applicant supply information about themselves and their family members to the Department of Homeland Security, Volpe said.

There have been pushes to make it a law and the support of more people could help, Volpe said.

An audience member asked how educators can become involved in supporting undocumented students.?

“Shame on us if we are not with them,” Vaquera said. “We need to be their champions. Make yourself visible in your university, make those safe spaces, make it known that you are a person who wants to help and who wants to be there with them … They need to hear voices that give them hope. Hope is easy to lose.”