Volunteering on campus led to discovering her passion: Farming 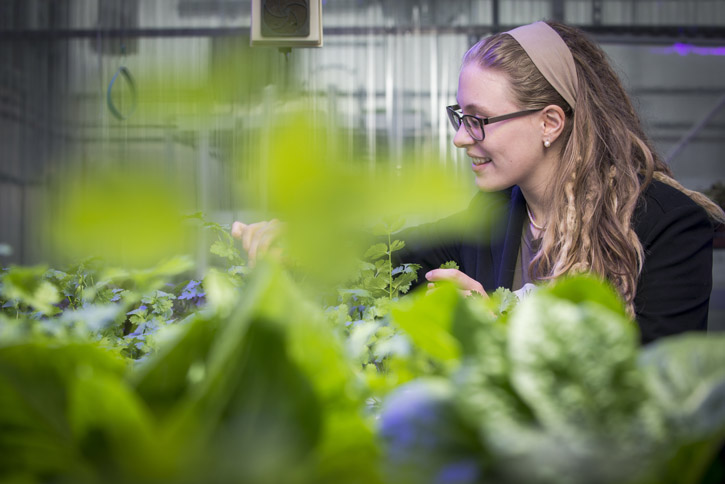 Donielle Nolan has a problem with thrips.

The tiny insects have invaded her carefully tended indoor garden in the Presidents Park Greenhouse, bedeviling her herbs and micro greens. But she has a plan to decimate them with thrip-eating mites.

Thrips and mites: It’s all in a day’s work for Nolan, whose official title is Greenhouse Coordinator in George Mason University’s Office of Sustainability, but she’s commonly known as the “Mason farmer,” and that’s OK with her.

When Nolan came to George Mason from Boston for her freshman year in the former New Century College (now called the School of Integrative Studies), she had no idea what her major might be. But after volunteering at the greenhouse and working with lab and research specialist Monica Marcelli, who manages Mason’s greenhouses, she knew she had a calling.

“I realized this is my passion,” she said. “I want to be a farmer.”

Not one to do anything halfway, Nolan dove into the field, so to speak, reading books on gardening, asking questions, working extra volunteer hours, earning a permaculture design certification and helping revitalize the GMU Organic Gardening Association, eventually becoming its president.

She graduated in May 2014 with a bachelor of arts degree in biology. The Office of Sustainability created the position of the Greenhouse Coordinator that year and hired Nolan.

The hydroponic garden Nolan oversees conforms to the certified standards required by Mason’s food service provider, Sodexo, to be an official vendor of fresh produce for use in Mason kitchens. In its first year, the Greenhouse supplied Mason’s kitchens with 1,400 pounds of greens, valued at $14,400.

Marcelli has no doubts Nolan will hit that goal.

“She’s a perfectionist, and whatever she does, she will do at a very high level,” Marcelli said. “She has so much potential to grow in her job. I can see her as a PhD student without any problem.”

Nolan also wants to share what she’s learned with others.

“I love teaching,” she said, adding that working with the student volunteers is one of her favorite aspects of the job. “I’m so enthusiastic about plants, and I’m enthusiastic about other people who want to learn. The enthusiasm is contagious.”

Not only did Nolan find a life calling at Mason, she also found a husband: Matt Nolan is an assistant professor of game sound and composition at the College of Visual and Performing Arts.

And yes, at their 31 ½-acre home near Warrenton, they have a farm.

“But it’s little, just an acre,” she said, and they grow produce “just for fun.”