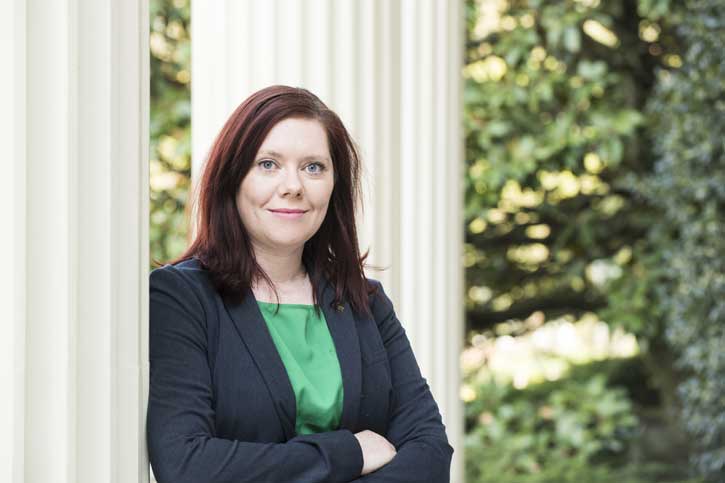 Charlotte Gill, assistant professor in George Mason University’s Department of Criminology, Law and Society, has received a Carnegie Fellowship to continue her work on police-community partnerships in crime prevention in Appalachian Kentucky. Photo by Ron Aira.

Growing up in Watford, England, Charlotte Gill always had a sense of fair play. She was especially concerned when she heard of failures in the criminal justice system, which was among the reasons she pursued a bachelor’s degree in law from the University of Cambridge.

But her studies also pushed her in a different direction, one that brought the assistant professor in George Mason University’s Department of Criminology, Law and Society to what she called the shocking announcement she has been awarded a Carnegie Fellowship by the Carnegie Corporation of New York.

Gill is one of 35 awardees out of 200 applicants for the prestigious award, which provides up to $200,000—the largest stipend of its kind, the corporation says—toward funding research in the social sciences and humanities.

She is the second Mason professor to receive the prestigious Carnegie Fellowship, following Louise Shelley, founder and Director of the Terrorism, Transnational Crime and Corruption Center, who received the award in 2015.

The federal Byrne Criminal Justice Innovation Program funds those projects. Gill said the Carnegie award will support travel expenses for her new project and allow her to bring on a research assistant.

“We’re planning to really find out from the people in the community what it means to be safe from crime and from what kind of crime,” she said. “Is it gun violence like in cities or is it another concern like opioid addiction or kids being involved in risky behavior online? We know a lot about what that looks like in urban areas, but we don’t know if it’s the same way in rural areas.”

“She is a complete academic, excelling in the classroom and in her scholarly pursuits,” said David Wilson, chair of the Department of Criminology, Law and Society. “Her research accomplishments are truly impressive for a young assistant professor.”

Gill’s path to her field of study included an unexpected turn.

She said she vividly remembers her first law class at the University of Cambridge, when the professor informed students that the study of criminal law is not about why people commit crimes or whether sentences are too short or too long—questions she wanted to pursue.

“So I found another field called criminology that addresses all these issues,” she said.

Gill received her master’s in criminology from Cambridge and her PhD from the University of Pennsylvania, and was a postdoc at George Mason for two years, reviewing studies about the effects of community policing.

“It was completely new to me,” said Gill, who was hired by Mason as a tenure-track faculty member in 2014. “But it really piqued my interest that there was this nebulous program that everyone said they are doing, but no one really knows what it is. It really got me thinking what it means to bring the community into crime prevention.”

Gill said she hopes to write a book about her Carnegie research in rural Kentucky.

“There are a lot of close-knit community values there,” she said. “The challenge is building capacity to deal with some of the problems they are facing. If it can get some attention, we can use that knowledge to think about how we can address some of those issues.”