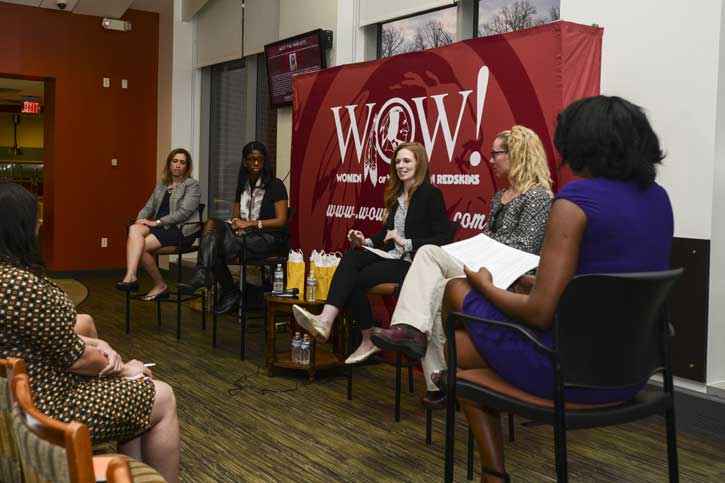 Women of the Washington Redskins (WOW), and Women in Sports and Events (WISE), hosted a panel discussion "Women in Sports Leadership-Challenges and Opportunities" at Mason's Fairfax Campus on April 5. Photo by Bethany Camp.

Getting more women into sports leadership roles requires networking opportunities, a willingness to create more leadership opportunities for women in sports management and mentorship from other female leaders, a group of industry experts said.

Those were some of the conclusions of a panel of female sports management professionals who met at George Mason University Wednesday, April 5, to discuss the importance of increasing women’s roles in sports leadership positions.

Jacqueline McDowell and Robert Baker, professors in the School of Recreation, Health and Tourism, organized the panel discussion, which was sponsored by Women of the Washington Redskins (WOW), an official club created for female Redskins fans, and Women in Sports and Events (WISE), a resource organization for women in the sports business. The two groups have joined forces to start a series of discussions about sports leadership at universities in the Washington metropolitan area.

McDowell said that these types of conversations must continue for change to begin.

The panel discussed a number of topics, including the impact of Title IX on women in sports, the challenges and rewards of working in leadership, and gender inequities in the workplace.

George Mason Athletic Director Brad Edwards kicked off the discussion with a reflection on his time with the Redskins and a dedication to providing more leadership opportunities for women in sports.

“Dreams do come true. But those dreams need to be available for everybody,” Edwards said.

Panelist Christine Bolger, associate director of coaching education at the U.S. Olympic Committee, noted that if women do not see other women in leadership roles, they may not aspire to those roles themselves.

Panelist Lyn Midcap, partnership marketing manager for the Washington Redskins and a Mason alumna, agreed, but said she is lucky to have strong female role models in her office who empower her each day.

Jennifer Montgomery, director of development for Mason’s Intercollegiate Athletics, advised audience members that once someone gets that first job in sports, it’s important to “ask for help” and look for mentorship opportunities from female leaders in the office.

Events like the panel discussion were created to help women in college sports network and connect with other female professionals, said Virginia Jurgensen, senior manager of affinity marketing with the Redskins.

“It’s important for a student who’s looking to get into the sports industry to learn best practices, challenges and opportunities, and to learn from women that are really successful in the business,” Jurgensen said.

According to statistics cited by McDowell, Title IX helped more women get involved in sports, but not in sports leadership. Reports from the NCAA say that the number of women coaching women’s teams has dwindled over the years, down to about 56 percent.

Terri Carmichael Jackson, director of operations for the Women’s National Basketball Player Association, said that one of her biggest challenges has been proving to her male and female co-workers that she could balance her work and personal life, even when her job was in New York and her family was living in Indianapolis.

“Women are not each other’s best support [in the workplace] and we need to be better,” Carmichael Jackson said.

But despite the long, demanding commitments of working in sports, panelists noted successful career moments that made it all worth it. Bolger said one of her most rewarding experiences came during an awards ceremony at the summer Olympics in Rio de Janeiro.

“When you’re standing in the middle of Rio and everyone in the house is quiet, they’ve all got their hands over their hearts and they’re just singing, it’s just a special experience,” she said.