A route to senior leadership in government 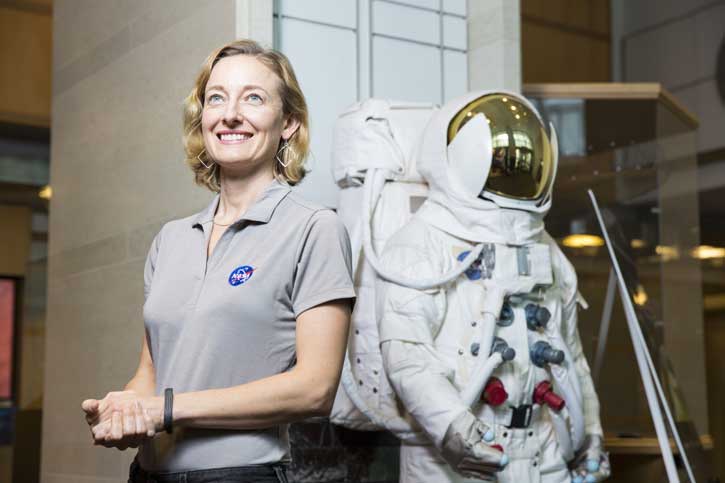 Charlotte Brock, a 2016 master's graduate in psychology, and a management and program analyst in the Office of the Inspector General at NASA, said the Presidential Management Program helped raise her confidence. Photo by Ron Aira.

For Charlotte Brock, the experience was the thing.

Brock, who earned her master’s degree in psychology from George Mason University in 2016, had already spent six years on active duty in the Marines and had worked as in intern at NASA in the office of Human Capital Management.

But even for someone with so much life experience, going through the application process and obtaining a job through the highly selective Presidential Management Fellows program raised her level of self-assurance.

“It’s a confidence builder,” Brock said of the program administered by the U.S. Office of Personnel Management. “The process of getting in is pretty rigorous, so by the time you get through it you feel pretty good about yourself.”

The half-day long interview also forces you to seriously think through your reasons for wanting to work in government, Brock said.

“It opens up exciting employment opportunities for our graduates,” said Kathryn Agoston, Mason’s graduate fellowship director. “It ensures that Mason alumni will be well-represented in positions of influence within the federal government for years to come.”

This year, 417 finalists were named out of 6,370 applicants. Those selected have the chance to seek jobs with participating federal agencies. Commitments are for up to two years.

“I was so humbled and excited when I found out I was selected,” Turchetti said. “I most look forward to the great network and support that comes with it.”

Brock landed with the Department of Homeland Security as a program manager in the Office of Management Integration. After six months, she left for a job at NASA as a management and program analyst in the Office of the Inspector General.

“A PMF is seen as kind of a route to senior leadership in government,” said Brock, who left the Marines in 2011 as a captain after two deployments in Iraq. “There are a lot of training opportunities and networking opportunities, so it’s a valuable thing. I was just more interested in getting back to NASA. If someone wants to work in government and is getting their master’s, there’s no reason not to apply.”