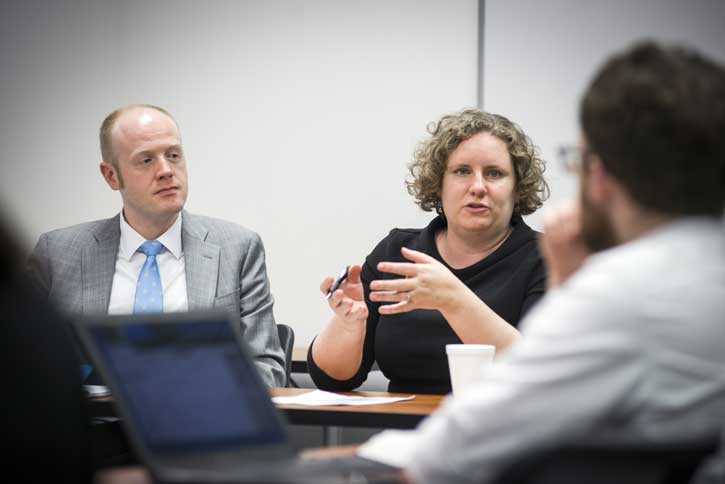 Brian Moulton and Sarah Warbelow teach Sexuality and the Law at the Antonin Scalia Law School. Both served as legal directors for LGBTQ issues with the Human Rights Campaign. Photo by Evan Cantwell.

Students enrolled in Law 390: Sexuality and the Law are benefitting from the extensive experience of two adjunct professors who have navigated sexual orientation and gender identity issues at the state and national levels.

Adjunct professors Brian Moulton and Sarah Warbelow both served as legal directors for LGBTQ issues with the Human Rights Campaign. Moulton is now legislative counsel for the Office of U.S. Senator Tammy Baldwin and continues to work with LGBTQ legislation.

Sexuality and the Law is a broad overview of issues surrounding sexuality and the law, including privacy and the regulation of sexual activity in relationship recognition,  employment, health care and military policies.

Jesse Holmes, a law school graduate and former student in the class, said he took interest in this topic after interning with the Human Rights Commission in 2009, when debates began about adding sexual orientation and identity to the law, and was inspired to take the course.

“These issues have been on my radar for a while as fundamental to being a person of liberty in this country,” Holmes said.

These laws surrounding LGBTQ rights are still developing today, Moulton says, and the class aims to examine its evolution throughout history.

The class functions in a seminar style, encouraging class-wide and small group discussions between students to reach conclusions about how the law can be applied in certain situations. Warbelow says this process helps students understand the myriad of ways these laws can be interpreted.

“We want the students to be deeply engaged in discussing with one another the complicated issues that arise in the cases that we’re looking at,” Warbelow said.

One example includes a case from Virginia about transgender students using gender-assigned bathrooms in public schools, which was taken up by the Supreme Court last year. The court has since sent the case back to a lower Virginia court for a ruling, but Moulton says it will be a part of discussions about gender rights in education.

Holmes said that each student applied their own experiences and thoughts to each discussion, which led to thought-provoking conversations about what the law is versus what it should be. One specific area that sparked a lot of discussion was how to best accommodate the needs of transgender people serving time in the criminal justice system.

While classes on LGBTQ legislation are increasingly becoming more popular in law schools nationwide, Moulton is hopeful that they will become reflected more in courses on topics like family law, contracts and immigration law, which also are discussed in their class.

“It serves an important purpose to encourage discussion about the ways other classes. . . do touch on these issues and how pervasive the issues facing LGBTQ people really are,” Moulton said.

Warbelow said that the class explores constitutional law and statutory interpretation, which are skills that law students should be able to apply in their other courses and in their legal careers.

Holmes says the class helped him set a foundation for his aspiration to address sexual orientation issues in labor and employment law.

“I learned more about the practical application of the 14th amendment through these cases and how it affects people in their daily lives in this class than any other,” Holmes said.