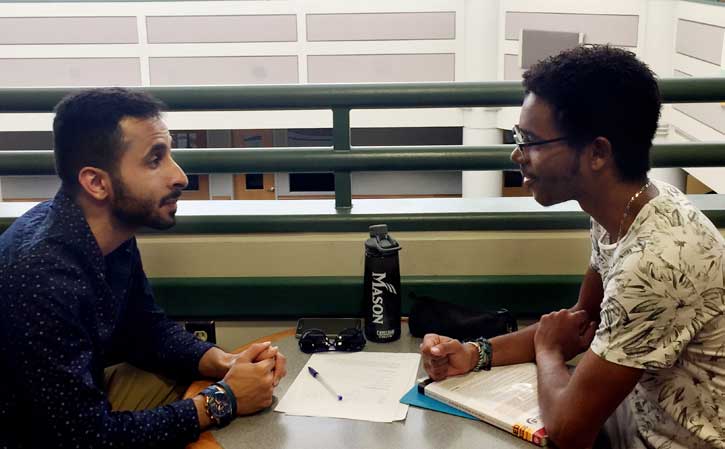 Her strong faith and a desire to understand the Qur’an in its original language led Shazia Noreen to take a second Arabic class at George Mason University.

“It feels more special to read [the Qur’an] in Arabic,” the senior communication major said. “I’ve always wanted to learn Arabic so I can teach my children … I’ve started [learning], but I’ve never finished,” she said.

Though she also speaks Urdu and the languages share the same alphabet and some words, she still found Arabic extremely difficult to learn.

“You can’t say the words ‘easy’ and ‘Arabic’ in the same sentence,” Noreen said.

Her ARAB 210 Intermediate Arabic class is a little easier, though, thanks to the Arabic Exchange Network, a new program that pairs native Arabic speakers with Arabic learners.

The exchange network was funded in part by a grant from the State Department’s Critical Language Scholarship Alumni Development Fund, said Nathaniel Greenberg, director of the Arabic program in George Mason’s Department of Modern and Classical Languages.

About 20 students participate in the program, which started this spring. Noreen is paired with Omar Alkhonini, a native Arabic speaker who volunteered for the program.

“It’s nice to interact with another Arabic-speaking person who is not your teacher,” Noreen said of Alkhonini. “He’s not grading you so you’re more relaxed. It’s more personal.”

Greenberg said the program has other benefits as well.

“One-on-one conversations in an informal setting allow students the opportunity to experiment more freely with the language they are learning,” he said. “At the same time, the student and the speaking partner get to know one another. They drink coffee, ask questions, maybe read something or watch something and chat about it. All the things we naturally do with language.”

Alkhonini, a linguistics graduate student at George Mason, said he finds joy in teaching, especially when he’s teaching others his native language. He taught English to Arabic speakers in his homeland of Saudi Arabia.

“For me, it’s my first language and so I like it when I see some people interested in Arabic,” he said.

Many people want to learn the language because they watch TV and hear about the countries and the regions where it is spoken, said Alkhonini.

“My first advice for every learner is, know that these are two different languages,” he said. “If there are some similarities that is good … however, warn yourself that there are way more differences than similarities. Learning this tip might be of a great help.”

Mason’s Arabic program is expanding to include an Arabic major in addition to the minor, Greenberg said.