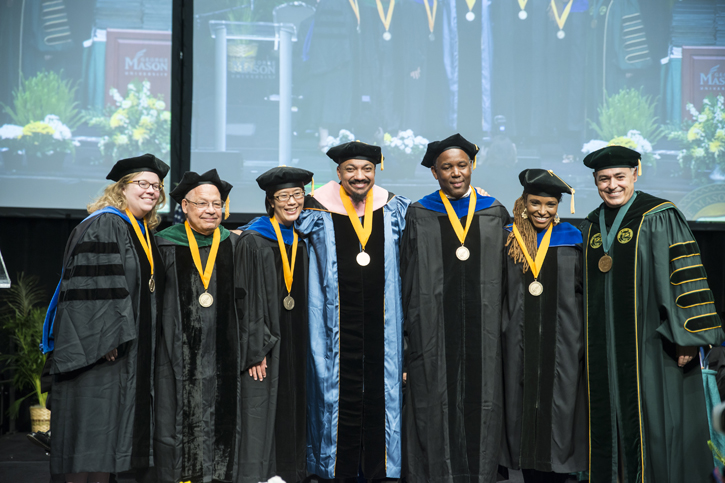 This year at Commencement, George Mason University awards its inaugural medals for faculty excellence, presented to faculty who represent the ideals of higher education and embody Mason’s vision. Learn more about these outstanding faculty members and their commitment to teaching, research and social impact in the classroom and beyond.

Jill Nelson: The John Toups Medal for Excellence in Teaching

“It’s a combination of innovation in classroom teaching and education research,” said Nelson, a professor of electrical and computer engineering at Mason’s Volgenau School of Engineering.

She strives to teach her students how the things they are learning can be applied not only in electrical engineering but also in other disciplines such as finance and social networking.

She’s also focused on engineering education research, specifically how students apply mathematical knowledge in their engineering courses and how faculty can be supported in implementing innovative teaching strategies.

It’s this dedication to education that earned her the John Toups Medal for Excellence in Teaching. She’ll return from her sabbatical at the Naval Undersea Warfare Center in Newport, Rhode Island, to accept the award at Commencement on May 20.

Her work with the Navy serves as an example for students of where an engineering and mathematical education can take you, Nelson said.

During her sabbatical, Nelson is working to develop ways for sonar operators to better find what they are looking for in the ocean.

It can be challenging for operators to tell the difference between objects of interest and other things in the ocean, she said. She is developing intelligent processing techniques that will improve the sonar system’s ability to identify objects of interest.

Lance Liotta: The Beck Family Medal for Excellence in Research and Scholarship

Receiving the Beck Family Medal for Excellence in Research and Scholarship is evidence that an extraordinary team of scientists and researchers at George Mason University has been able to accomplish their goals, said Lance Liotta, co-director of Mason’s Center for Applied Proteomics and Molecular Medicine.

“I look upon [this award] as a tribute to our entire team; this is a tribute to [our] really fantastic goals,” said Liotta, who will receive the medal at Commencement on May 20. “Our objective was to conduct cutting-edge medical scientific research.”

Another goal was to advance their work to the clinical trial stage where it can help patients, Liotta said. The team was also able to spin some of their discoveries into patents, something that elevates Mason, he added.

For more than 10 years, the Aspiring Scientists Summer Internship Program has encouraged young people to explore the sciences. Thousands apply for the program each year, he said.

The award is a celebration of Buddy Beck, someone who has been a tireless advocate for innovation and research at Mason for more than a decade, and whose efforts paved the way for Mason to achieve the highest ranking from the Carnegie Classification of Institutions of Higher Education, Liotta said.

“What we have created here at Mason is unique in the world,” Liotta said. “We are really proud because it gives us the opportunity to recognize him.”

Kevin Clark: The Karen and Hector Alcalde Medal for Excellence in Diversity and Inclusion

A simple request from his 5-year-old put a George Mason University professor on a mission to explore questions of diversity in media.

Kevin Clark’s daughter was deep into her “princess” phase, which meant a princess-themed bedtime story every night.

“One night she asked if we could have a princess that looked like her,” Clark said.

What seemed like a simple request turned out not to be.

“I had trouble finding a book that featured a black princess,” he said. “I thought, ‘This is crazy, we are in the 2000s and my daughter doesn’t see herself in children’s books.’”

As a result, Clark, a professor in the College of Education and Human Development, said he created the Center for Digital Media Innovation and Diversity at George Mason.

It is his work at the center and other efforts that earned him the inaugural Karen and Hector Alcalde Medal for Excellence in Diversity and Inclusion. He will be presented with the award at Commencement on Saturday, May 20.

His work focuses on academic research, but it also includes media research, which allows him to have an impact on what young people see and consume daily through television and movies.

Impact is one of the things that sets him apart.

“When you look at my body of work, it’s not that of a traditional academic and I’m proud of that,” he said.

Wendi Manuel-Scott: The Karen and Hector Alcalde Medal for Excellence in Diversity and Inclusion

Many of the classes Manuel-Scott teaches in George Mason’s College of Humanities and Social Sciences focus on people and communities that have been historically marginalized.

She works to ensure that all students feel included by making sure their voices are heard in the classroom and by encouraging them to be unafraid to show up authentically and share their point of views, Manuel-Scott said.

She takes it a step further by encouraging student interaction with the community. Manuel-Scott formed a partnership with Sterling Middle School in Loudoun County, so students there can interact with Mason students who worked with them on developing good time management and study skills.

“Loudoun County is home to me. I’m completely committed to investing in Loudoun,” said Manuel-Scott, whose children attend schools in the area.

Sterling Middle has many students who speak English as a second language or who come from families who are experiencing financial challenges, she said.

The program started with the younger students visiting Mason; in just two days more than 250 students visited the campus, she said. Next, Mason students went to Sterling Middle.

“They have been transformed by working with the middle school students,” Manuel- Scott said. “It was an opportunity to engage in social justice.”

Her dedication to promoting diversity has earned Manuel-Scott the Karen and Hector Alcalde Medal for Excellence in Diversity and Inclusion, which will be presented at Commencement on May 20.

Cynthia Lum said she’s motivated not by her past experiences as a Baltimore police officer, but by what she sees as a future for policing.

She’s doing that through her work in the Center for Evidence-Based Crime Policy at George Mason, where Lum is a director.

The center is devoted to not only generating high quality research, but trying to get that research used in practice. It is these efforts and others that earned her the Earle C. Williams Medal for Excellence in Social Impact, which she will receive at Commencement.

She appreciates the award as a reflection of the work of the center, which uses rigorous, research-based study of criminology and criminal justice to serve as an informational resource for practitioners and the policy community.

“It’s wonderful that the university recognizes both research excellence and also the impact that we have with that research,” she said. “It sends a good message: ‘This is what we are about, it’s what distinguishes us.’”

“What … makes Mason unique, what makes us great, is that we have those connections across different types of communities. Not just local, state, regional, national, or international. But across diverse communities within those realms, and that’s really important.”

Professor Michael W. Nickens, director of the Green Machine pep band, an avid tuba player, and now the winner of the Earle C. Williams Medal for Excellence in Social Impact, says teaching at the university level is a way to accomplish many things.

“Higher education allows for a wide range of experiences and interactions, from the absolute beginner all the way through the world-class performer,” Nickens said in previous interview. “I like that kind of variety, and access to that whole spectrum improves how I interact with every part of it.”

Northern Virginia, his home, is a place of cultural convergence, and Nickens says there’s a way to express that cultural influence through music.

He does that via the Green Machine, an ensemble that’s as synonymous with Mason as green and gold. Maybe more.

The band is known for its covers, especially its medley of Rage Against the Machine hits. A cell phone video of the medley from 2011 went viral and continues to rack up views on YouTube. The band’s repertoire also includes hits by Beyoncé, Kanye West and Pharrell Williams.

“I wanted to make the [Green Machine] less segregated than a radio station,” he says. “I want as many people as possible to see themselves in our repertoire. I want them to see the richness of the community.”

Nickens also put his mark on the original Mason Fight Song when he updated it in 2009.