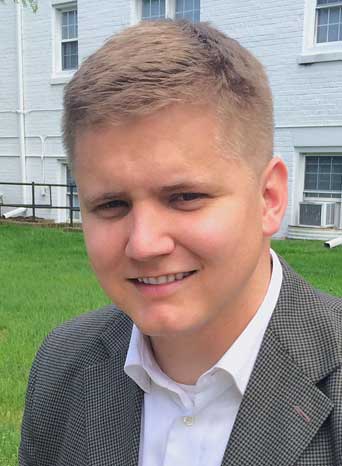 Thomas Wheatley came to the Antonin Scalia Law School at George Mason University to be near “the stage where everything important happens,” he said, meaning the political power center of Washington, D.C.

“I was always impressed that you could be in a classroom with a professor in the morning and then later that day they’re on CNN or being published in the Wall Street Journal,” he said.

For four years, the Lawrence, Kansas, native took full advantage of that proximity. He gained exposure to the highest levels of the nation’s judicial system, including campus visits by Supreme Court justices and classroom talks by high ranking officials.

In addition, his opinion pieces were regularly published in the Washington Post.

No doubt his impassioned takes on current events and his internship at the Court of Appeals for Veterans Claims contributed to his successful application to the U.S. Army Judge Advocate General Corps, also known as the JAG Corps. Wheatley, who served in the Army ROTC as an undergraduate at Florida’s Embry-Riddle Aeronautical University and was an intern for a JAG at Fort Bragg last summer, will join the JAG Corps after his graduation from Scalia Law School this month.

Wheatley, whose Post columns exhibit a strong conservative doctrine, came to George Mason’s law school because of its location, affordability and what he called “its reputation for being sort of a maverick.

“The professors also challenge you on everything you say and encourage you to listen to the other person’s side of things. They never let you just state an opinion and leave it at that.

“It goes back to the school’s motto: ‘Learn. Challenge. Lead.’”

Wheatley hopes to continue to contribute columns to the Post as he feels it keeps his writing and critical thinking sharp. But he acknowledges he might not be as feisty of a firebrand as he was when he was a student.

“I understand there are lines you shouldn’t cross, but the military encourages civic participation,” he said. “And the military respects the First Amendment. So we’ll see.”