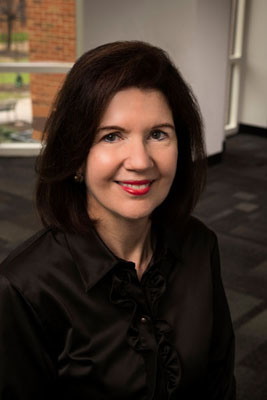 Watch the final credits of the film “Gold” starring Matthew McConaughey and directed by Stephen Gaghan, and you’ll see Anne Schiller’s name roll across the screen.

Schiller, a George Mason University professor who served as a consultant on the movie, said it’s gratifying to be able to contribute to the way indigenous peoples are portrayed.

“For me as an anthropologist, I have a huge debt—an enormous ethical responsibility—to help their cultures be presented accurately and with dignity,” she said.

“Gold,” released in theaters in December and available on DVD and streaming now, is based on the true story of a gold prospector working in Borneo, an island spilt among Indonesia,  Malaysia and Brunei.

It’s a fictionalized account of an actual gold mining scandal that impacted the New York Stock Exchange in the late 1980s and early 1990s. Schiller was on the island during part of the time these events unfolded.

In 2015, when one of the film’s producers asked her about working as an adviser on the project, Schiller said her acceptance was dependent on how the indigenous people, the Ngaju Dayaks, would be portrayed.

“For hundreds of years, the Ngaju Dayaks of Borneo were characterized as  ‘wild men’ with a ‘culture of violence,’” said Schiller, who works in George Mason’s College of Humanities and Social Sciences.

After talking with the screenplay writers, Schiller said she was convinced that the project was worthwhile.

“I was impressed that the director, screenwriters, crew and actors wanted to understand indigenous people and how the gold-mining activities of multinational corporations have affected their environment,” she said.

“The writers embraced my suggestion that we involve two Ngaju Dayak friends as co-consultants: Sunita Hanyi, host of a Ngaju Dayak culture radio program, and Bajik Simpei, a priest in the Ngaju Dayak indigenous religion, Hindu-Kaharingan,” she said.

Schiller, Hanyi and Simpei instructed the cast and crew on how to do a religious ritual, including the exact language used by the priests. Although the scene was cut, it was authentic, Schiller said.

The filmmakers also were very eager for the actors to speak the local dialect correctly, and audiotapes were prepared by Hanyi to help them practice.

In the end, the local consultants were satisfied.

“We must not only be the spectators of culture; we must play a role in preserving it,” Hanyi explained.

Schiller said she became interested in Borneo early in her career because she wanted to conduct research in an area where anthropologists hadn’t done fieldwork in a very long time. She attributes being able to work on films on the island to the strong ties she’s made there during decades of fieldwork.

“In anthropology, it’s very important who vouches for you. One of the things I am most proud of is that I have deep relationships of affection and trust with my Ngaju Dayak friends,” Schiller said.