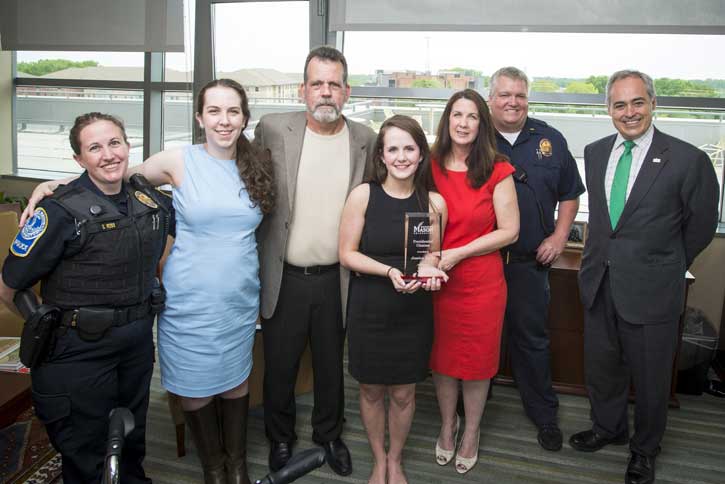 Jessica Early (center) received a Presidential Citation for saving a man's life by administering CPR until paramedics could arrive. Photo by Evan Cantwell.

She knew she wanted to be a nurse one day and help save lives. But Jessica Early didn’t know her chance to save someone would come unexpectedly in the middle of the night a few weeks before she even finished college.

In March, a night of fun with friends ended in her administering CPR to her roommate’s guest at their campus townhouse.

The 22-year-old George Mason University neuroscience major said she’d only met the man whose life she saved a couple of hours before.

Early said she and her boyfriend noticed the guest behaving strangely in the kitchen.

“He was on the ground, not passed out, but was kind of just hanging out down there,”

They put him in a bedroom and made plans to monitor him throughout the night.

“I heard weird noises coming from the room so I went in and he was sitting up in bed kind of vomiting and making gargling noises,” Early said.

She made the decision to call 911 when he went from sitting up in bed to passed out.

The dispatcher told them to move him from the bed and down to the floor, so she could begin CPR.

“I’d had CPR training because I teach kids gymnastics … but really had not ever practiced it. It was definitely the help of the 911 operator that helped me be able to do that,” Early said.

The paramedics later entered the room and instructed her to keep going.

“I was like ‘What? This is not over,’” she said. “He’d lost all color. He was not moving. I thought he was dead at that point. I was very panicked.”

But emergency officials took him to the hospital and were able to save the man’s life.

Early was honored with a Presidential Citation on May 1 at George Mason.

A Presidential Citation is a noncompetitive award presented by Mason President Ángel Cabrera to a person or group who “performs an exceptional deed or service related or unrelated to their job responsibilities, or took personal risk or sacrifice to perform a deed or service, or displayed good citizenship and a sense of public responsibility.” Early was nominated by Mason Police Capt. Emily Ross.

“Because of Ms. Early’s decisive and immediate actions, this allowed the responding EMS unit to continue providing advanced life support without any time lost, which led to the victim’s survival and discharge from the hospital later that day,” Ross wrote in the nomination.

“Had it not been for her immediate decisions she made that morning, this situation would have ended tragically.”

Early graduates from Mason in May will pursue a graduate degree in nursing at the University of Pennsylvania.