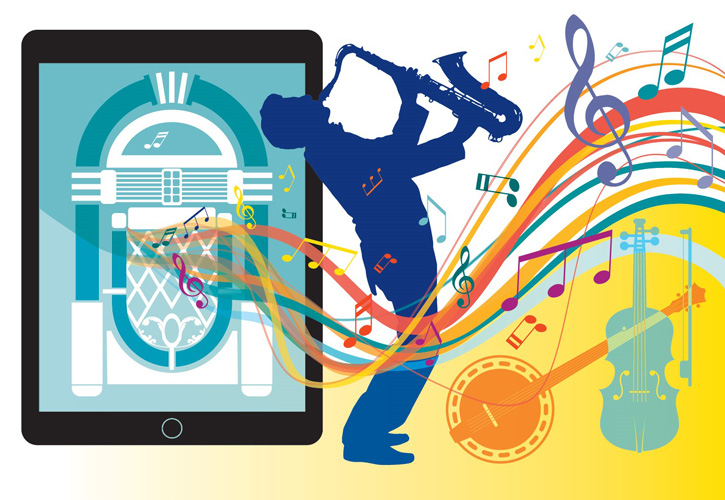 Placing 20th-century popular music in a context that makes it more accessible and understandable is the goal of a new grant-funded project at George Mason University’s Roy Rosenzweig Center for History and New Media.

The $30,0000 grant was awarded by the National Endowment for the Humanities, an independent government agency that supports nationwide research in the humanities. The project is led by Sheila Brennan of the center, and by history and art history professors Matthew Karush and Michael O’Malley.

Karush and O’Malley will be working primarily with two recently digitized collections of 20th-century music through the Library of Congress’ National Jukebox and the University of California at Santa Barbara’s Cylinder Audio Archive.

While this music is now digitally available for interested users to listen to, Karush says there is not enough information to properly guide users’ listening experience, especially if they are unfamiliar with early 20th-century sounds.

“For the wide majority of listeners, it’s very difficult to make sense of that music,” Karush said. “Partly because it was a long time ago … it can sound all the same.”

Their goal is to help listeners better “hear” music from that time and understand its transnational roots. They plan to create a website that would provide both musical and historical context to these collections, making available a wide range of relevant primary sources and offering explanations on topics from  “What is the blues?” and “What is syncopation?” to “What are the origins of the banjo?”

“We want to reexamine the origins of American music and the way the history of music sheds light on broader developments in American history,” O’Malley said.

The music that informs the sound of current American popular music is rooted in jazz, blues and country, genres that developed in the middle decades of the 20th century. But these influences have their influences, and much of this history is about race.

For example, according to O’Malley, the banjo in the 19th century was predominately played by African Americans, or by white people in minstrel shows who wore blackface makeup and made fun of African Americans for entertainment. However, in the 20th century, the banjo evolved to become a symbol of authentic white country music in the Appalachian region of the country.

“We thought we could bring the contextualization to these collections that would enable nonspecialist listeners to make sense of them and use them,” Karush said.

Elements of music from other countries—like the tango from Argentina—also had influences on 20th-century music, which demonstrates the transnational nature of the early American recording industry. This project, said O’Malley, will make listeners think more critically about what “authentic” American popular music is.

In the educational context, Karush said a website like this could help his students better understand their learning materials. He also hopes that once the website is up and running, there will be a way for listeners to contribute their own research to help grow the information provided by the website.

The team is currently working on its overall goals and objectives for the project and hopes to begin work on the website in the coming year.