Conflict students learn firsthand how to deal with a humanitarian crisis 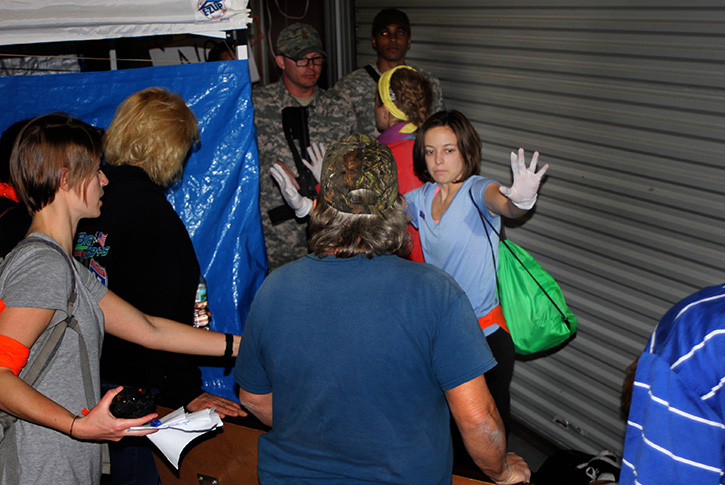 Christina Sumner (center) was one of nine Mason students to participate in a field exercise that simulated the challenges humanitarian workers might face in an active conflict zone. Photo provided.

For four days this spring, master’s and PhD students at George Mason University’s School for Conflict Analysis and Resolution learned what it was like to be peace practitioners in an active conflict zone.

The simulation took place at a compound in Fellsmere on the east coast of Florida. Some 70 participants, including George Mason conflict graduates, residents of the town and members of the 436th Civil Affairs Battalion role-played officials, soldiers and residents of Atlantica, a fictitious country mired in a civil war. As tensions between the industrial north and the rural south turned violent, the population reeled from the devastation of a Category 4 hurricane.

Nine Mason students and about 20 other students from additional universities —Kennesaw State, Wayne State, Nova Southeastern and Tulane—plunged into this volatile mix, taking on roles of humanitarian aide workers from a nongovernmental organization.

“You keep reminding yourself it’s only a simulation, but it wasn’t always easy,” said Anna Laura Grant, a conflict resolution master’s student. “I would tell myself, ‘We just got yelled at by the director of the humanitarian project, but it’s OK.’ ”

Students alternated roles so they could learn how to set up a displacement camp, negotiate with imposing authorities and, in general, help reduce the conflicts inherent in a fast-changing crisis.

In one instance, an aide worker was taken “hostage” at a road stop.

“They really tried to replicate as much as possible the real-life scenarios that people might experience in the field,” Grant said.

The field operation is a program of the Forage Center for Peacebuilding and Humanitarian Education, whose president, David J. Smith, is a Mason alumnus and adjunct professor. Mason students have participated in the exercises since 2013.

“The skills acquired during the experience are valuable to a range of conflict-sensitive jobs, not only overseas but in the U.S.,” Smith said. “The aptitudes developed—teamwork, assessment, engaging effectively with groups in crisis, staying on task and managing stress—can be applied in many occupations.”

The field exercise was developed in response to a 2010 report by the U.S. Institute of Peace in Washington, D.C.

“The report noted that employers were looking for applicants that had field experience and could manage projects and execute initiatives, often under trying conditions,” Smith said. “The Atlantic Promise exercise was developed to respond to that need by employers.”

Among other duties, Grant negotiated terms with military leaders to gain permission for her NGO to operate in their country, a task that in real life can be fraught with danger. In the end, they signed the documents.

“You’re trying to be compassionate and get your job done and not get caught up too much in failures, because basically everything is designed for you to fail. You experience the real challenges of being in the field.”

Grant gained insight into her leadership skills and crisis response skills, and discovered strengths she didn’t know she had.

“They told us not to make any major life decisions during the exercise and I’ve kind of followed that, but it has directly impacted me,” she said. “It was one of the most powerful experiences I’ve had at Mason.”