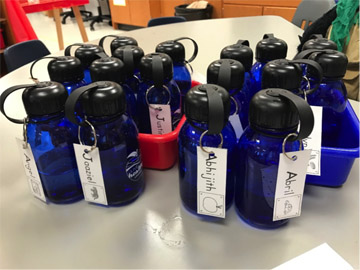 Loudoun County preschoolers reduced their sugar intake—and their chances of developing obesity―thanks to a pilot program that promotes water consumption.

The team worked with county and federal government officials to bring the program to all Head Start and Virginia Preschool Initiative (VPI) classrooms in Loudoun County.

These programs provide child care and school readiness services to income-eligible families. Often, these children are most at need for obesity prevention efforts, as obesity rates among children enrolled in Head Start can be almost two-fold higher than national estimates, said Sina Gallo, a professor in George Mason’s Nutrition and Food Studies Department who is working with the program.

“Early life prevention efforts are key,” Gallo said. “The program is teaching children to choose water first when they are thirsty rather than soda or juice.”

About 426 preschoolers, ages 3-5, were enrolled in Head Start and VPI during the project, said Michaela “Misha” Mlejova, who worked with the Loudoun County Health Department as part of the practicum for her MS in nutrition, which she earned in May from Mason.

Before the program was implemented in late 2016, Loudoun County preschoolers were drinking about eight ounces of apple or orange juice during the school day, Mlejova said. Children in this age group shouldn’t have more than 10 grams of sugar in a day, so an eight-ounce serving puts them at or near their limit.

Aligned with the launch of the “It’s Water Time” program, school administrators decided to eliminate all juice from the preschool classrooms and replace it with fresh fruit.

“We estimate this small change will prevent an excess weight gain of [about] four pounds per student over the course of a year, which is a lot for a preschooler,” Gallo said.

Mlejova, a professionally trained ballerina originally from Slovakia in central Europe, put her dance skills to use by choreographing a dance the children can do with the song.

“It’s like a mini-performance for the kids,” she said. “You get to see their reaction and how they enjoy it.”

“Captain Hydro,” a penguin mascot, serves as a water-drinking role model, she added.

The program provided individual personalized reusable water bottles, and Captain Hydro magnets to put on classroom schedule boards to indicate when it is water time.

“The kids know what to do. They go to refill their water bottles and drink,” Mlejova said.

The effort to promote drinking more water is timely, as the American Pediatric Association in May announced new guidelines concerning the amount of juice intake for young children.

Both Loudoun Head Start and VPI plan to continue the program over the next school year and provide teachers with training. The team has also made the “It’s Water Time” curriculum available online for public use.