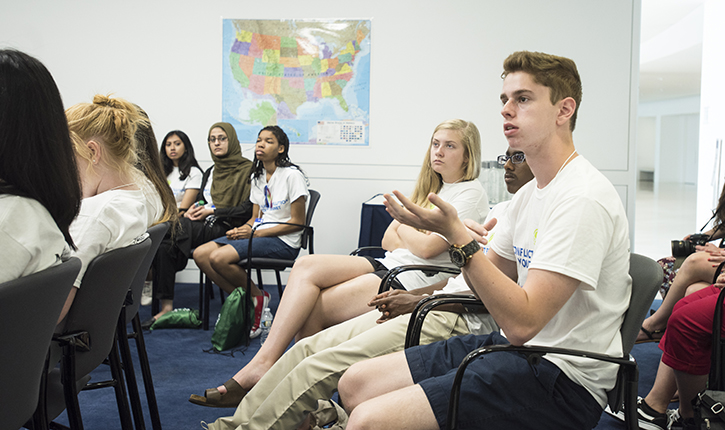 Dozens of Syrian refugees have just been delivered by the Italian Coast Guard to a Red Cross intake facility in southern Italy. They have been at sea or in holding areas for several days, and they are scared, confused and hungry. A few of them have wounds, others suffer the trauma of having seen family members lost at sea.

It’s up to the humanitarian aid workers to process each refugee’s medical and family history as completely and as swiftly as possible to get them the help they desperately need. But there are language barriers, not to mention conflicting priorities: The refugees want food and shelter, the aid workers need information. And 500 more refugees are 15 minutes away.

That was the scenario facing 35 Washington, D.C., area high school students earlier this month as they participated in a humanitarian crisis simulation as part of a weeklong Conflict Resolution Youth Summit hosted by George Mason University’s School for Conflict Analysis and Resolution. Students took on the roles of refugees and aid workers at the mock intake facility on George Mason’s Fairfax Campus.

The biggest surprise of the week, said Nico Feldman of Ashburn, Va., who attends Briar Woods High School, was not “how passionate we all are about conflict resolution, but finding out how much we didn’t know about such a big topic. Being able to explore that, and go ever deeper and deeper in depth was great.”

“It’s really cool to be with a group of people my age that have a similar mindset about solving problems in the world,” she said. “No one has said, ‘It’s not our country, it’s their problem.’”

“I was impressed by how everyone connects and how everyone I talk to gets along,” he said. “I really enjoyed making connections.”

The refugee simulation, conducted by Mason adjunct professor David J. Smith, summit senior program director Sarah Kincaid and three youth counselors, was a dramatic highlight of the week. When the intake session was done, Smith conducted a debriefing to talk about what went right and what went wrong.

“Practitioners need to have the right mindset to do the important work they do,” said Smith, whose organization, the Forage Center for Peacebuilding and Humanitarian Education, conducts humanitarian simulations. “It is possible that some of these students one day will be working overseas as humanitarians and they might remember something they did in a simulation at Mason.”

Summit participants also visited the National Museum of African American History and Culture and the United States Institute of Peace in Washington, D.C.

“The overarching thing I’ve learned is that conflict can be both positive and negative, and you can take a lot from conflict,” said Westfield High student Princess Diana Sarmiento. “It shouldn’t just be focused on your side, you should also be open-minded.”