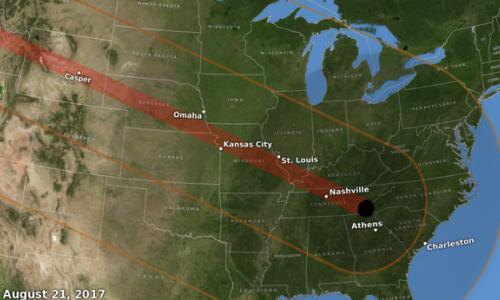 The upcoming solar eclipse is still several weeks away, but Mason researchers are already helping others prepare to collect data and learn from the event.

Jill K. Nelson, an electrical and computer engineering professor in George Mason’s Volgenau School of Engineering, and Laura A. Lukes, assistant director of Mason's Center for Teaching and Faculty Excellence, are co-principal investigators on the EclipseMob (eclipsemob.org) project, which is funded by a grant through the National Science Foundation. They have received 151 requests for experiment kits from people in 31 states and two countries who want to help gather low frequency radio wave data during the eclipse. Graduate student Jennifer Henry will also be collecting data during the eclipse on Aug. 21 in the Johnson Center.

Harold Geller, term associate professor of physics and astronomy and director of Mason's observatory, will host a half-day workshop for 40 local teachers on Aug. 4. Using funding from the Virginia Space Grant Consortium, Geller will provide each participant with 10 pair of eclipse viewing glasses and a packet of materials from NASA.

The workshop will give K-12 educators an understanding of the nature of a solar eclipse, what there is to see and how to view the sun safely during the eclipse and other times, Geller said.

Nelson, Lukes and Geller are taking all of these steps in advance of Aug. 21, when darkness will fall for about three minutes as the moon passes between the sun and the Earth.

It will be a busy three minutes for scientists, including George Mason University researchers, as they scramble to gather as much information as possible about a layer of the Earth's upper atmosphere called the ionosphere.

Disturbances in the ionosphere, found 46 to 620 miles above the surface of the Earth, lead to radio wave problems and GPS glitches. Emergency communications also use the ionosphere when cell towers are down, in situations like hurricanes, and therefore might experience problems due to disturbances. A solar eclipse is a rare opportunity to learn more about the atmosphere.

"Since a solar eclipse occurs much more quickly than the day-to-night transition, it offers the opportunity to study the behavior of ionospheric disturbances under predictable conditions,” Nelson said.

She and fellow researchers will be joined in their exploration of this phenomenon by a network of citizen scientists, including amateur radio operators, STEM educators and high school students.

"My role is focused on designing low-cost receivers that can be used by [the] citizen participants to record data during the eclipse, as well as on studying the geographically distributed measurements we obtain through the project," Nelson said.

Lukes said the project could lead to improved communication systems.