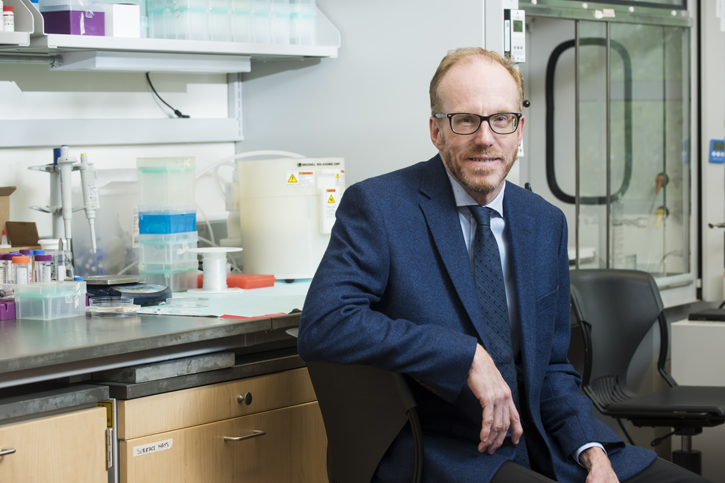 Michael Buschmann joined George Mason University on Aug. 1 as Eminent Scholar and chair of the Department of Bioengineering. Photo by Ron Aira.

His groundbreaking work in the field of tissue regeneration meant that Michael Buschmann was no stranger to tantalizing job offers.

But it was the vast possibilities he saw in George Mason University that captivated him most, convincing him to uproot and leave Montreal after a successful run of more than 20 years there.

“There are a lot of opportunities there,” said Buschmann, who, on Aug. 1, assumed his new duties as Eminent Scholar and chair of Mason’s Department of Bioengineering, will be a key part of Mason’s Institute for Biohealth Innovation. “The department is young and dynamic and very energetic in a lot of areas. It has a lot of opportunity for growth.”

The addition of Buschmann is a major coup for Mason as it seeks to better its burgeoning status among the ranks of nation’s elite research institutions. Buschmann first established his multidisciplinary research program at Ecole Polytechnique in 1994, focusing on the use of biomaterials to repair damaged knee joints and to deliver a new class of drugs based on the genetic information in RNA.

His work that has translated to commercial products include a biomaterial implant that repairs knee cartilage and a diagnostic instrument that measures cartilage health. The cartilage repair product is an affordable and effective way to repair cartilage that helps to prevent knee arthritis, while the diagnostic instrument for knee cartilage guides orthopedic surgeons in choosing the appropriate treatment for patients. The more recent RNA delivery nanoparticles are being developed for vaccines and to treat kidney diseases due to a unique property of delivering these molecules to kidney cells.

Buschmann will install his lab and recruit his new team near the Center for Applied Proteomics and Molecular Medicine at Mason’s Science and Technology Campus.

To create Buschmann’s startup package, the Center for Innovative Technology, an organization that invests in Virginia growth, awarded Mason $250,000 as support for its Eminent Researcher proposal to go along with the $125,000 Inova added as an in-cost share for Mason’s Bioengineering chair hire. Mason provided $500,000 toward the entire package in the hopes of building on the ongoing momentum originating from its SciTech campus.

“That’s what it takes to have an established researcher in this area,” Crawford said.

Buschmann said he welcomed the opportunity to foster closer collaboration between Mason and Inova, while also adding to Mason’s research infrastructure and growing number of researchers.

“The science and the research are really strengthened by sharing ties with industry,” he said.

Buschmann is joined at Mason by his wife, Caroline Hoemann, a professor with an internationally recognized research program in the area of biomaterials and cartilage tissue engineering. She will install a tissue engineering laboratory at the SciTech Campus, and develop new courses to teach in the school’s Department of Bioengineering. Also coming with the couple, who have worked together on tissue regeneration for roughly 20 years, is their youngest son, Axel, an avid jazz drummer and piano player who will enroll at Mason this fall.