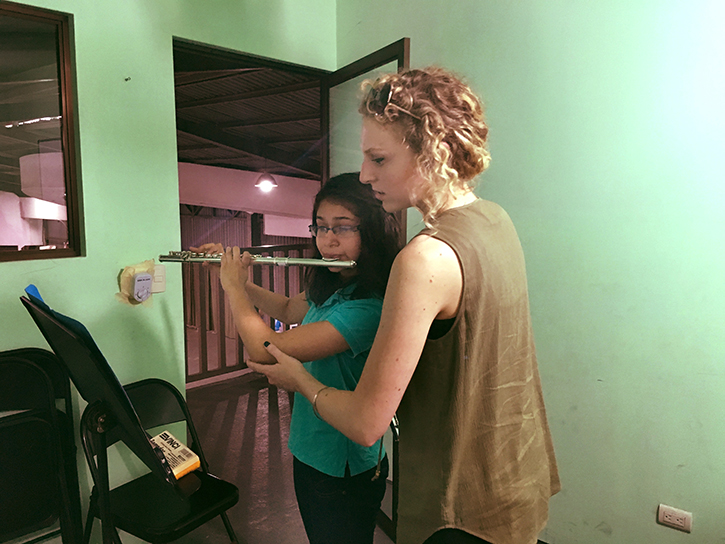 Flautist Krista Pack, who graduated from Mason in May, said she would like to teach music abroad. Photo courtesy of Krista Pack.

Days after Krista Pack earned her bachelor of music degree from George Mason University in May, she traveled to Costa Rica as one of six International Teaching Scholars representing George Mason’s School of Music.

For the flautist, the chance to travel internationally, perform and teach all in one trip was a personal trifecta.

“Music is so powerful and amazing to me,” Pack said. “I would love to be able to teach it abroad.”

The program is an iteration of the Instruments in the Attic Teaching Scholars program, which sends Mason School of Music students to local elementary schools where instruction is paired with instruments donated through the program, said Libby Curtis, executive director of Mason’s Potomac Arts Academy.

The international program is a collaboration of the academy, the School of Music, the Nacional Instituto de la Musica in Costa Rica and the SINEM Program, the Costa Rican government’s initiative to establish quality music programs in communities.

Making sure the scholars saw how music is used as a vehicle for social and societal improvement was an important objective of the trip for Mason faculty, said John Kilkenny, Mason’s director of percussion who, along with Curtis, came up with the idea for the Costa Rican collaboration. Kilkenny and Curtis accompanied the students on the two-week trip, along with Linda Apple Monson, director of Mason’s School of Music.

Seeing the students realize the profound impact of music on an entire society is incredible, Monson said.

“When we decide to be music educators, we are educating the whole person,” Monson said.

Only a few of the scholars spoke Spanish, but the language wasn’t as much of a barrier as Pack expected.

“It was really cool to see how music connected us and linked us together, so it was great to sit next to them [and play] and have that musical bond,” she said.

One day, during a class break, a teenage Costa Rican flautist stayed behind and, through a series of gestures, asked Pack to play the music on his stand.

“I would play, and then he would play; we had a [nonverbal] exchange. We can teach more through showing and doing than just talking,” Pack said.

In addition to teaching, performance and learning were key goals of the trip for the scholars, who also performed with Banda de Conciertos de San Jose, the San Jose concert band, Kilkenny said.

While visiting the Nacional Instituto de la Musica, a college, they played with other students, Kilkenny said.

“It was a successful first year for the program and we’re still planning the program’s future,” Curtis said. “We all know there will be something next. But it may look a little different every year.”

Local business owners Jenna and Jason Day, of Day Violins, along with JP Phaup, a former Mason Alumnus of the Year, largely supported the scholars’ trip, adding to funds the students raised themselves. 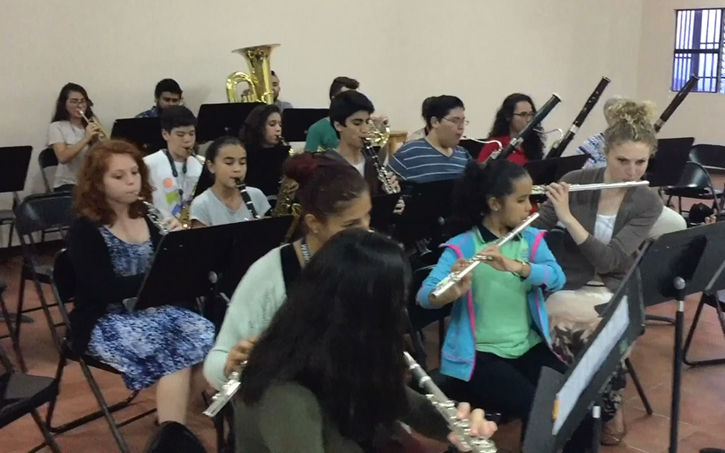 "It was really cool to see how music connected us and linked us together," said Pack (right, with flute). "It was great to sit next to them (and play) and have that musical bond." Photo courtesy of Krista Pack.