In this program, the work is like ‘pulling pieces from a puzzle’ 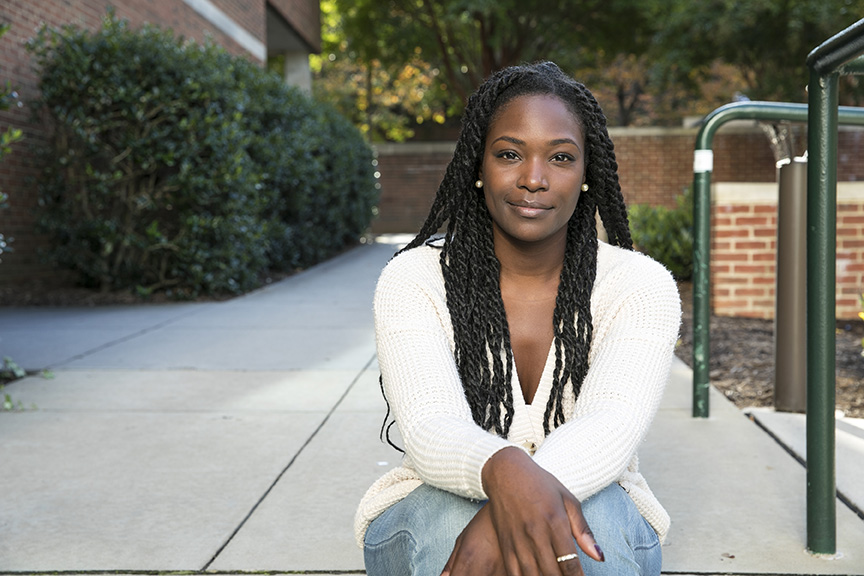 Lauren Paige, a fourth year PhD Candidate in psychology, conducted a PTSD assessment on an armed services veteran who had previously been denied government benefits. Photo by Ron Aira.

Lauren Paige usually does not get to know what becomes of those to whom she gives a psychological test. The George Mason University PhD candidate said this helps her stay objective.

But in the case of Dylan Crosby, Paige made an exception, and what she found out made her smile.

Crosby had come to George Mason’s Center for Psychological Services for a post-traumatic stress disorder assessment. Paige determined Crosby has PTSD and that it is at least 50 percent attributable to his military service. Because of that, Crosby is receiving partial benefits from the U.S. Department of Veterans Affairs.

“I don’t know what would have happened without George Mason’s help,” Crosby said. “I definitely owe them a lot of thanks.”

“All I ever wanted to do was help people,” said Paige, in the fourth year of Mason’s six-year clinical psychology doctoral program. “Yes, I’m in school forever, but along the way I can make an impact on people’s lives. That helps fuel me.”

Paige is one of 15-20 doctoral students who will work at Mason’s center in an average year. Counting therapy and testing by both doctoral and master’s students, the center saw 441 clients the past fiscal year with more than 3,000 client contacts, said director Robyn Mehlenbeck.

As a partner of the Lewis B. Puller Jr. Veterans Benefits Clinic in the William & Mary Law School, and other participants in the National Veterans Legal Services Program, the center has done an average of five PTSD assessments a year. That might jump to five a month because of a new partnership with the Virginia Department of Veterans Services, Mehlenbeck said.

Mehlenbeck said she handles all referrals, and only advanced doctoral students test veterans, but not before doing five comprehensive assessments to show their competency.

Paige, who majored in psychology at Spelman College and has a master’s in mental health counseling from the University of Miami (Fla.), has those qualifications.

“She has a remarkable ability to get people to open up to her,” Mehlenbeck said. “And she has an incredible strategic mind to put puzzle pieces together, which is what you need to do in these exams.”

Paige said Crosby’s assessment took about eight hours over two days and included an IQ test and two personality tests, with 200 and 567 questions, respectively. There also was an interview in which Crosby explained his symptoms and the traumas that might be causing them.

In the Navy from 2003 to 2009, Crosby said he told Paige about pulling bodies from the water in New Orleans after Hurricane Katrina, the mysterious death of a buddy and what he called the harrowing training that is supposed to prepare soldiers for torture in case they are captured.

“I wake up screaming once or twice a week,” Crosby said in a phone interview. “I have a much shorter temper than I used to. I get pretty anxious in a crowd and I’m on medication. Most days I’m on the verge of tears and complete anger and rage. I’m not that kind of person.”

Paige put it all in a 20-page report.

“The assessment hat is my favorite hat, personally, because it’s like pulling pieces from a puzzle,” she said. “It really does involve figuring out what’s relevant and what’s not, and coming up with this really comprehensive view of the person.”

For Paige, who wants to work as a military psychologist, the experience was invaluable, as has been her time at Mason.

“You can tell people are passionate about what they do here,” she said. “That’s really reflected in the faculty and the students as well. It’s incredible. It’s what I need.”