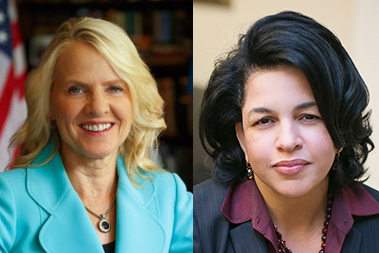 The Winter Graduation guest speakers, each an alumna of the university and a first-generation college graduate, exemplify how a George Mason University degree is a foundation for a career of purpose whether directly related to a major or not.

Bethany Hall-Long, PhD Nursing ’93, arrived on campus with a devotion to patients and quickly developed a passion for policy, leading to an influential career in public health and, just last year, her election as lieutenant governor of Delaware after serving 14 years in the General Assembly there.

Petula C. Metzler, BS English ’94, went on to law school and is now the first African-American judge in the history of the Prince William County (Va.) General District Court.

Like many of the students she will be addressing, Hall-Long, 54, made the most of her opportunities in the Washington, D.C., area. She worked as an assistant manager of labor and delivery at Inova Fairfax Hospital and served fellowships with the U.S. Senate and the Health and Human Services Committee. She earned her doctorate in just three years.

“It was a fabulous experience at Mason, and my interest in public health really did expand,” said Hall-Long, who for the past 20 years has taught in the School of Nursing at the University of Delaware. She believes nurses’ ability to solve problems, make quick decisions, gain trust and communicate with people of all ages and backgrounds is apt preparation for a career in public service.

“Nurses like to step back and assess a situation and figure out strengths and limitations,” Hall-Long said. “And then put in place actionable solutions.”

The first paying job Metzler ever had growing up in a blended family of 13 siblings in rural North Carolina made her wonder what kind of future she might have.

“When you’re 12 and picking cucumbers, and that’s the environment you live in, even if you really want something better and different for yourself it gets really hard sometimes to imagine how that would be possible,” Metzler, 50, said.

To earn money for college, Metzler (first name pronounced PETCH-uh-luh) enlisted in the Army, emerging three years later with $21,800 earmarked for education. She pursued an English degree at Mason and later enrolled in law school at Catholic University the same year her son, Logan, started kindergarten. Stints as an intern for a judge and as a law clerk piqued her interest in someday presiding over her own courtroom.

Each day, between exiting her chambers and entering her courtroom, Metzler repeats the three words that guide her bench demeanor and sense of fairness: “Aim for grace.”

“I absolutely love it so much,” she said. “It feels like what I was meant to do relative to my skills and my temperament. It’s like someone said: ‘Here’s your perfect job.’”