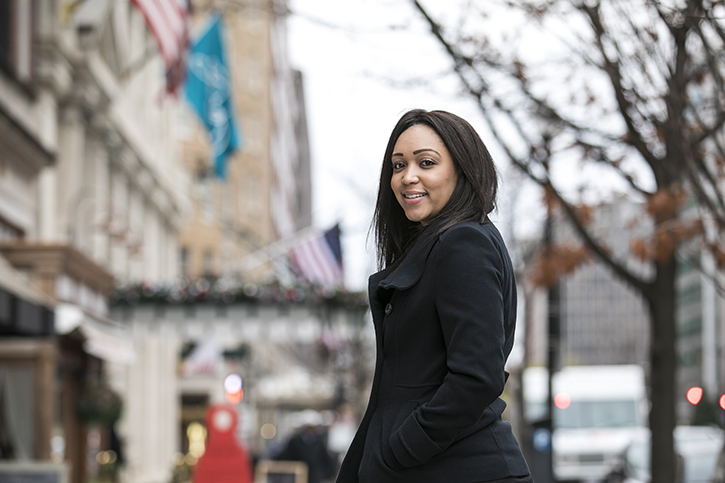 Maya Hairston graduates with a degree in conflict analysis and resolution on Dec. 21, 2017. Photo by Ron Aira.

Maya Hairston is waiting for acceptance letters from law schools. She’s already been accepted to UCLA, the University of California-Berkeley, William & Mary and the University of Baltimore, but she’d like to see what the others are offering as incentives before committing.

“There’s psychology, sociology, criminology—and you use it all to help resolve conflict on a personal, or even international, level,” she said. “You engage in multiple perspectives and look at different angles.”

But law school wasn’t on her horizon until she realized law was a way of fulfilling her most important career intention: to help children and juveniles stay out of the justice system. She discovered her passion during three years as a summer camp counselor at the YMCA of Central Maryland working with four- and five-year-olds.

“I want to help those kids, the kids that will become the next generation of leaders,” she said.

This comes as no surprise to Tehama Lopez Bunyasi, the assistant professor at Mason’s School for Conflict Analysis and Resolution who served as Hairston’s mentor.

“It is clear to me how invested Maya is in improving the lives of people of color in the United States, and I admire the fearless ways she stands for what she believes in,” says Lopez Bunyasi. “She is the kind of young person we need leading her generation through today's and tomorrow’s steep challenges.”

Other highlights include becoming the inaugural president of the Honors College Black Ambition (now the Honors College Multicultural Alliance), working on sexual assault issues with SisterMentors, serving as a peer student success coach with other Mason students and becoming a member of Phi Beta Kappa Honor Society as a junior.

Along the way she was involved with the Black Leadership Roundtable, the Golden Key Honor Society and the Presidential Advisory Group.

She also got to see some of the country—at least the Atlantic 10 locations—as operations manager and a practice-team player for the women’s volleyball team during her freshman year, and visited South Africa on her first trip abroad with an opportunity to study the antiapartheid movement there.

Now she waits to see which law school she’ll attend, but while she’s waiting, Hairston will see criminal justice up-close in a temporary position with the Public Defenders of Service of the District of Columbia.

“I hope to find out if being a public defender is actually something I would like to do,” she said. “It will be more or less the grunt work of public defense so I will thoroughly be able to explore my interest.”