Jim McLean is the December Employee of the Month 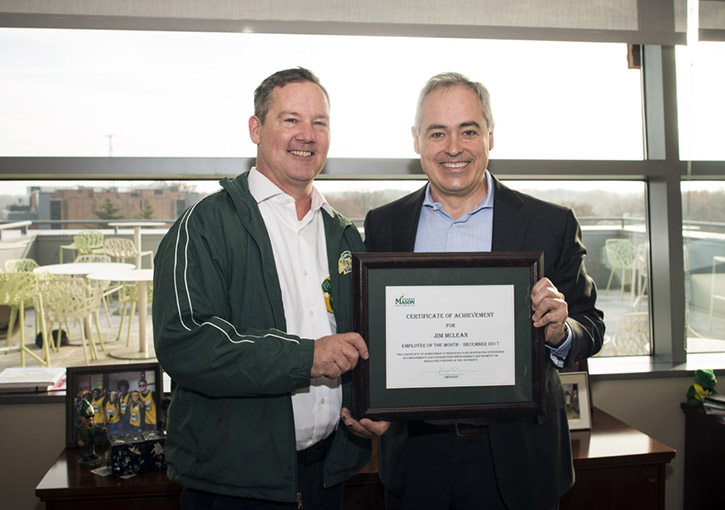 Jim McLean is the December 2017 Employee of the Month. Photo by Evan Cantwell.

Jim McLean is involved in so many things at George Mason University he cannot name them all without a few silent moments to ponder.

Let’s see, there is his work, generally, as an instructional technologist with the Online Learning Resources group. He is the administrator for the media platform for the university’s Blackboard system. His workshops instruct faculty how to best capture and integrate media into their courses.

He works with instructional designers in George Mason’s Online Course Development Institute, and with the Assistive Technology Initiative. And he is helping establish an immersive technology space that will concentrate on teaching and using 3-D printing, 360 video, and virtual and augmented reality programs.

Anythin else? That’s when McLean stops for a moment to think.

“He really is a rock star in his area,” McLean’s supervisor, Joe Balducci, said.

McLean also is December’s Employee of the Month.

“It’s awesome,” he said of the honor.

McLean graduated from Mason in 2000 with a bachelor’s degree in art studio, and began working at the university in 2013 after a stint as a USO tour photographer, and earning his master’s degree in film and electronic media from American University.

He loves that his office in the Collaborative Learning Hub in the Johnson Center looks onto the lobby so he can see the comings and goings, and he enjoys walks on the Fairfax Campus.

“I like to go out and meet people where they are and find out what challenges they are having and how I can help them improve what they are doing,” he said. “That’s where I thrive. I feel like there’s an openness on campus with people wanting to learn and experience the tools we have.”

“He loves finding ways to use technology in unique situations,” Balducci said. “He’ll find a means, and usually in a cost-effective way, to use simple technology but in powerful ways.”

An example is the five “lecture capture bags” McLean developed, which include, as he explained, everything a faculty member needs to do a field recording or a livestream.

“It’s very simple,” he said. “You just plug and record. The system is set up so you don’t have to tweak the audio or worry about where anything goes.”

Where it goes is into a better learning experience for students.

“That’s why I’m here,” McLean said. “That’s the center of why I’m on this campus and working in this field.”