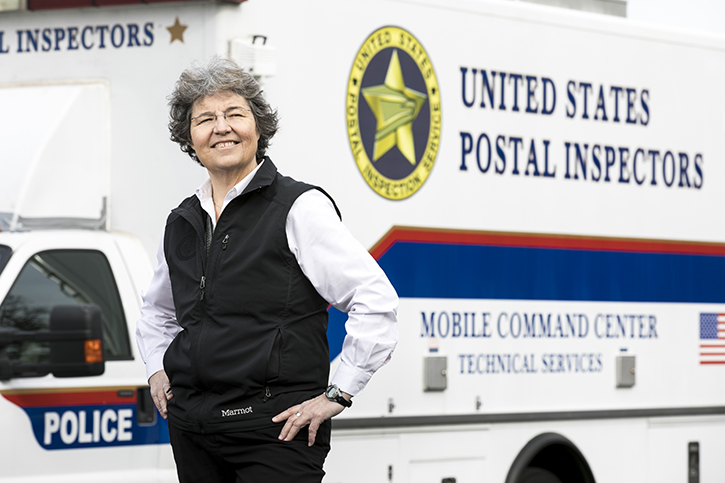 When the U.S. Postal Inspection Service assigned forensic chemist Stephanie Smith to a temporary assignment to support the Security and Crime Prevention Group, one of her first duties was to write the job description of a new permanent scientific advisor position.

Whoever worked in that important role would enhance the detection of chemical and biological security threats in the mail.

Smith early on realized the position demanded a strong chemistry and bio foundation, and she wanted to expand her knowledge, especially in the area of biodefense.

She found what she was looking for at George Mason University’s biodefense program at the Schar School of Policy and Government. Originally enrolled in a biodefense certificate program, Smith became intrigued by the broad program.

“I’m a forensic chemist by training, that’s what I’ve done my entire career,” she said. “I came to Mason to study the ‘bio-side’ of this complex advisor position, but I realized I was also expanding my knowledge beyond science and into the policy side.”

The new knowledge was not just intriguing but also useful to her job.

This month Smith will graduate with a master’s degree in biodefense, having studied agroterrorism, virology, biosurveillance and bacteriology, as well as nuclear, biological and chemical weapons policy and security.

Her capstone project was based on her idea that the method of detecting bioagents in the mail could be improved.

“Stephanie is obviously an exceptionally talented individual,” said Sonia Ben Ouagrham-Gormley, an associate professor in the Schar School’s Biodefense Program. “What Mason provided her was a focus on developing a project that can stand the test of academic rigor as well as industry scrutiny.

“The [capstone] course also helped her present her research in a convincing manner. In fact, her management allowed her to conduct an experiment to test her idea.”

The capstone project was successful, yielding experimental results that offer real promise for practical use.

Once Smith wrote the job description for the new position of “Scientific and Technical Advisor, Dangerous Mail Investigations” for the Postal Inspection Service, it was determined there was only one person qualified to fill a job that required knowledge of chemistry, biodefense, security and public policy.

That would be Stephanie Smith. She got the job.