Marylou Holly is January’s Employee of the Month 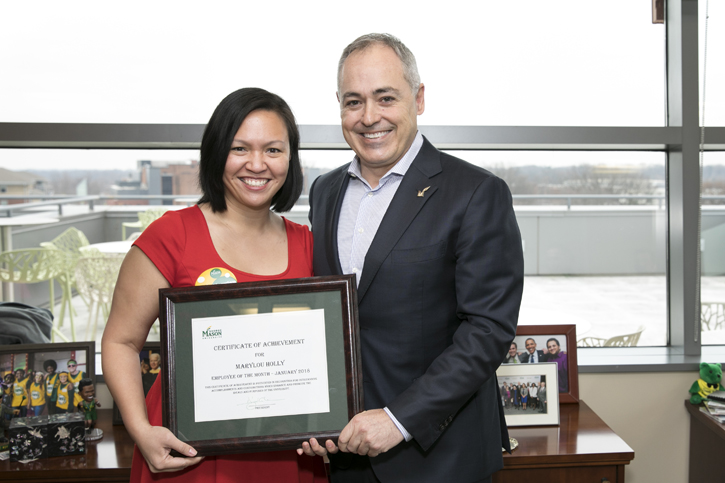 Marylou Holly, applications analyst, IT Services, Facilities, is the Employee Of The Month for January 2018. Photo by Ron Aira.

Normally, standing in front of a crowd and making even a small speech would be Marylou Holly’s worst nightmare.

“I hate being the center of attention,” she said. “I’m usually behind the scenes. That’s what I like to do.”

But as January’s Employee of the Month Holly had no choice but to overcome her aversion to the spotlight to thank the almost 30 people who came to Merten Hall to watch George Mason President Ángel Cabrera present her with the award.

And she loved it.

“It was amazing,” she said of the event. “I am so appreciative of all the co-workers I have worked with over the years. It has been an amazing experience working at Mason, and it’s nice to know that so many have appreciated my hard work.”

It wasn’t surprising the presentation attracted a crowd.

After becoming pretty much indispensible as associate registrar for scheduling and communication, leading a team that managed classroom scheduling on all Mason campuses, she recently took a position as an applications analyst in IT services in Facilities, and has become equally invaluable.

There she is implementing software that will manage the workflows, budgets and scheduling of all new and current campus construction projects.

“She is a wonderful employee,” said Chris Freas, director of Facilities’ IT services. “Her vision and work ethic, and the way she takes the requirements of our staff and IT and merges them to make a system that bridges the gap between technology and what people actually do is phenomenal.”

Holly has been with Mason for 10 years, eight in the Registrar’s Office, where she managed the scheduling of more than 10,000 fall- and spring-semester classes and more than 4,000 in the summer, juggling Mason’s space limitations and making sure each classroom included the appropriate technology. She also was integral in implementing the 25Live system, which facilitates classroom and event scheduling, and Course Leaf, which helps manage the university’s catalog and schedule of classes.

Too late. As Casey Campbell, an RTC network engineer in Mason’s IT Services, wrote in his letter endorsing Holly for Employee of the Month:

“Marylou kicks butt. It’s people like her who really run this place, and without whom this place wouldn’t work. If this were the apocalypse and she was a warlord leading a band of survivors, would I join her and let her lead us? Yeah, probably. So give her some awards because … I’d rather she was on my side than not.”