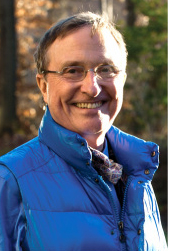 If left unchecked, this problem could be disastrous to the Amazon rain forests and have dire consequences for the South American economy as a whole, Lovejoy warned.

Scientists had initially believed that the Amazon’s ability to sustain the rain forests could withstand as much as 40 percent deforestation, but that number is now believed to be much lower at 20 to 25 percent, Lovejoy said.

Lovejoy, who also serves as a science envoy for the U.S. State Department, recently co-authored a paper along with noted Brazilian climatologist Carlos Nobre for Science Advances that cited recent severe droughts and extreme floods as evidence that the entire Amazon rain forest system is teetering as a result of years of uncontrolled development and deforestation, including illegal gold mining.

“[The Amazon’s] real value is its incredible biodiversity,” said Lovejoy, a University Professor in Mason’s Department of Environmental Science and Policy. “It’s basically a gigantic library for the life sciences if you don’t burn it down. It has vast potential for all kinds of advances.”

The Amazon has always remained healthy, moist and green because it generates half of its own rainfall by recycling moisture as air masses move east to west, crossing from the basin from the Atlantic, Lovejoy said.

“The hydrological cycle of the Amazon is fundamental to human well-being in Brazil and adjacent South America,” Lovejoy and Nobre wrote in their paper.

Deforestation, however, disrupts this cycle as soils dry up, less water returns to the atmosphere and rainfall is significantly less.

Lovejoy said the onus is on each country to properly manage the Amazon as a system by finding the political will to act now and using available modern technology to enforce existing laws.