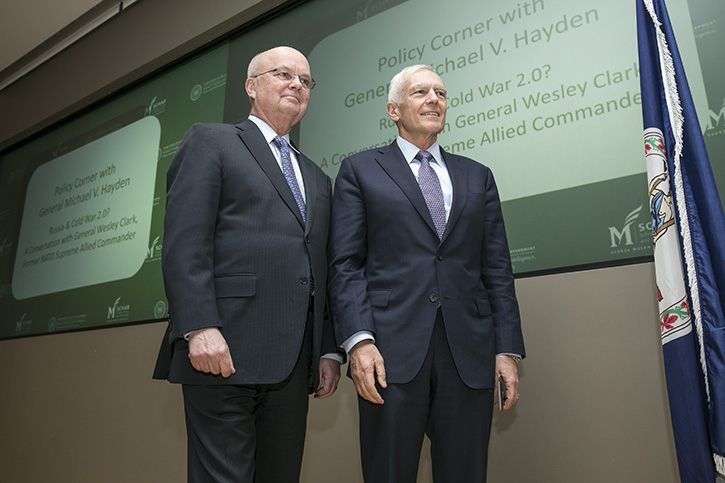 The speakers were two retired four-star generals—Army General Wesley Clark and Air Force General Michael V. Hayden—and the topic of conversation was the name of the program: “Russia-U.S.: Cold War 2.0.”

Exposure to the process of policy-making and military deployment decisions makes programs such as these valuable, two Mason professors said after the event.

“You get to see how real-world decision making happens,” said Robert Deitz, a former senior council at the CIA and the NSA and now a professor of policy at Mason’s Schar School of Policy and Government. “You can put yourself in their position and say ‘That’s what they have to think about.’”

“I think the best part about this talk was remembering that history matters,” said Schar assistant professor Michael Hunzeker. “I liked the question [a Mason student asked], ‘What’s the lesson we haven’t been learning?

“And the perfect answer [from Clark] was because we haven’t bothered to stop and ask why we won [the Cold War]. I took note of that, and I’m going to teach that in class.”

The program was hosted by the Michael V. Hayden Center for Intelligence, Policy and International Security at the Schar School.

With the Robert Mueller investigation of Russian meddling in the 2016 presidential election as backdrop, the conversation between the international security experts—Hayden is the former director of the CIA and the NSA—focused on the Kosovo war  and Clark’s time as the NATO Supreme Allied Commander Europe from 1997 to 2000 before shifting to current events.

Hayden, a professor at the Schar School, asked Clark to detail what went on behind the scenes of one of Clark’s most controversial episodes at NATO, when Russian troops’ occupation of the Pristina International Airport in Kosovo ended in a two-week standoff.

Clark recounted the many global phone calls to and from superiors in what he called the “geopolitical chess match” before a resolution was reached, to which Hayden concluded, “Welcome to coalition warfare.”

As for today’s tense relationship with Russia, “the old struggle never ended. The Cold War never ended,” Clark said. “This is not a replay of the Cold War. What we’re seeing now is real-time, covert, hybrid warfare.”

Russian president Vladimir Putin, Clark said, is intent on “breaking the system [of the West], and that leaves Russia more secure and more powerful.”