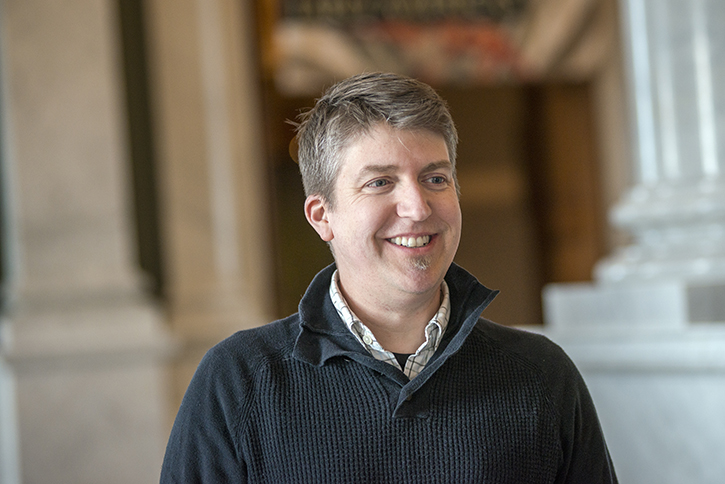 Assistant Professor Garry Sparks, shown here at the Library of Congress, is working with colleagues from around the world to translate an ancient Mayan text into English and Spanish. Photo by Evan Cantwell.

Garry Sparks studies religion at the intersection of history, culture, and language. His current research, funded by the National Endowment for the Humanities, has gathered the scattered remnants of an ancient text, the “Theologia Indorum.” His team’s translation of that text from the Mayan language of K’iche’ to English and Spanish will shed light on how the first Spanish missionaries shared their faith in the New World in the 1500s.
Written in the 1550s by Dominican friar Domingo de Vico, the Theologia Indorum was initially composed in K’iche’, an indigenous language still spoken by more than one million Guatemalans today.
“The Theologia Indorum was not a translation of a Western European Christian document originally written in, say, Latin or Spanish and then translated into an indigenous language,” said Sparks, who teaches in Mason’s Religious Studies Department. “Instead, [it] was originally composed in a native language and then translated only into other related Mayan languages.”
For Sparks, the most significant finding of the Theologia Indorum is how it relates to contemporaneous writings by the Maya.
“We’re fortunate because K’iche’ elites learned the writing system developed by and taught to them by Catholic missionaries and soon began to write their own books for their own purposes within only a decade or so," he says.
Reading the Theologia Indorum in the context of Mayan writings indicates not only how Christianity was transmitted to the native population, but how they received it.
“It’s the first time we can actually look at the contemporaneous paper trail and recreate an interreligious dialogue between missionaries and indigenous people,” Sparks said.
Vico completed Volume I in 1553 and Volume II in 1554. Until the 1970s, understanding of the Theologia Indorum was limited, and it was catalogued as a collection of sermons or catechisms, with the few surviving copies dispersed in repositories all over the world.
“A lot of the initial research on it was just tracking down how many surviving copies we have, and none of them are complete, so I’ve had to cobble them together,” Sparks said.
In 2016, Sparks and a team of researchers received a National Endowment of the Humanities grant to prepare a critical edition and English translation of the first volume of the Theologia Indorum.
Sparks, who specializes in the history of religions and Christian theology, is one of the translators and a coordinator for the project. Other team members include Frauke Sachse, a linguistic anthropologist at the University of Bonn in Germany; Sergio Romero, a Guatemalan socio-linguist at the University of Texas at Austin; and Saqijix Candelaria López Ixcoy, a linguist at Rafael Landívar University in Guatemala City and a native K’iche’ speaker.
The project’s initial goal was to transcribe the first volume of the Theologia Indorum, but their work on Volume I went so quickly that they were also able to completely transcribe Volume II.
Their next step will be to produce an English and Spanish translation, both in terms of a literal translation of the document, “and then a much more fluid, idiomatic English translation that will be much more accessible,” he said.
With help from the Roy Rosenzweig Center for History and New Media, the team will develop a website that will make the Theologia Indorum digitally available, with full-color, high-resolution scanned images of its K’iche’ manuscript of Volume I along with the scholarly transcription and translation.
“For the first time since the 16th century, someone can read Volumes I and II and get the entire architecture of the argument,” Sparks said. “The whole idea is to really just get it out there so a whole host of other scholars across the disciplines can begin playing with it.”