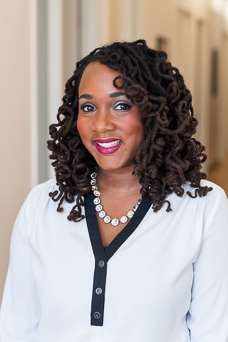 Danielle Moodie-Mills hosts a Sunday morning show on SiriusXM radio, in which she talks about politics and the resistance, with a little pop culture thrown in the mix. Photo provided.

Danielle Moodie-Mills describes herself as the “Warrior Princess of the Resistance.”​

She has been one of the faces and voices associated with the LGBTQ movement and has made appearances with MSNBC, The New York Times, CBC News and many other news sources talking about progressive issues ranging from racial justice to marriage equality. ​

She hosts a Sunday morning show on SiriusXM radio, in which she talks about politics and the resistance with a little pop culture thrown in the mix.Moodie-Mills is now in a space where, she said, she fully and unapologetically embraces her role as an outspoken advocate for social justice. ​

The George Mason University alumna credits her advocacy to her roots as an educator.​

Moodie-Mills was attracted to the Mason program after noticing the education gap between white children and children of color. ​

“[It] was a lot about unpacking your own bias,” said Moodie-Mills. “Unpacking the discriminatory policies that you've been taught and really getting to the core of the child and their family, and really being a partner with those families and the development of their children.”​

Julie Kidd, a professor in the College of Education and Human Development, said she is not surprised by Moodie-Mills’ activism and that she embraced the role of advocate for diverse young children and their families while a student in the UTEEM program.​

While the UTEEM program is no longer offered at Mason, it has served as the foundation for the school’s Early Childhood Education Program, which is committed to preparing educators, leaders and researchers to work with and on behalf of culturally, linguistically, socio-economically and ability diverse young children, their families and their communities.​

After graduating from Mason in 2006, Moodie-Mills taught at a bilingual charter school in Washington, D.C., for two years, then took what she learned and pursued a career in education policy. ​

She worked as a Congressional Black Caucus fellow in the office of Rep. Yvette Clark, D-N.Y., a legislative representative in New York City under Mayor Bloomberg and the National Wildlife Federation.​

In 2009 she became engaged to her girlfriend (now wife), Aisha Moodie-Mills, six years before marriage equality became law in the United States.​

“I became, in some respect, an ‘off-the-couch’ activist,” said Moodie-Mills.​

After sharing photos of their wedding in 2010, she and Aisha were the first same-sex wedding to be featured in Essence magazine. Moodie-Mills said people tell her they use her wedding photos to come out to their families.​

"Representation matters, and when we were getting married, like any excited brides we're running to the magazine stands to pull down all of these wedding and bride books—and all they had on the cover were straight white brides,” said Moodie-Mills. “We recognized that until you see something, you don't know that you can be it."​

In addition to her advocacy and radio show, Moodie-Mills serves as a vice president for SKDKnickerbocker, a strategic communications company that provides strategies to companies, nonprofits, labor unions and political committees and candidates. She and her wife had also created Politini, a newsmagazine-style podcast that reported news and pop culture with a twist. ​

But her life, Moodie-Mills said, circles back around to her start as an educator. She hopes to grow her platform and her radio show to provide social lessons to adults that they, in turn, will be able to teach to their children.​

"My life is like an education campaign,” said Moodie-Mills. “Essentially, it's one big public service announcement about how we can be better and what we can do better, and you do that by making sure you're informed."