He lived through war, now he’s living for a future 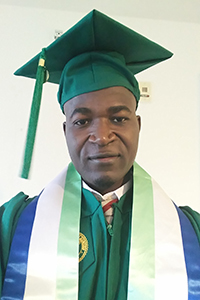 Amadu Koroma was only three at the start of the Sierra Leone War, when his uncle carried him on his shoulders as their family fled to Guinea for safety. Though the war ended in 2002, the consequences still affect Koroma, and they motivated him to make the most of his education.

“Most of my life I’ve been guided with the little knowledge that I’ve got,” said Koroma, a 2018 conflict analysis and resolution graduate. During his family’s escape, Koroma was separated from his father and never heard from him again.

Because of his father’s absence, Koroma feels he’s missed out on having supportive role models.

“I didn’t have that person [to guide me] and I always feared that if I wasn’t careful, I’d end up doing something that might mislead me in the future,” he said. “I use education as a tool to develop myself in a way that I think will help me to achieve something better.”

His path hasn’t been without challenges. When Koroma won a lottery for high-achieving African students to study in the United States, he said some members of his family discouraged him from taking the opportunity.

But he pressed forward and attended Mason’s School for Conflict Analysis and Resolution (S-CAR)—a natural fit for the peace and conflict studies degree he was working toward in Africa.

“Going through that civil war, [I learned] about challenges—things like what went wrong and how we could be in a better position to handle such situations, instead of allowing them to escalate,” he said.

Koroma’s time at Mason was both rewarding and challenging. He said learning how to use computer software and applying analytical thinking to essays differed from the test-taking style he was used to.

“I watched [Koroma] struggle, engage, inquire and thrive [in his transition to a different educational system],” said S-CAR professor Patricia Maulden. “I was impressed by his commitment to learning, to better understanding conflict and resolution approaches, and his strong engagement in discussions and group projects.”

“[Maulden] guided me in many ways,” Koroma said, adding that his grades in other courses improved after meeting with her to discuss assignments. He also appreciates the leadership skills he gained as an intern for the Dialogue & Difference Project, where he organized events and was a public face for the program.

Now that he’s graduated, Koroma wants to work for an institution addressing human rights issues, and he knows the skills he gained at Mason will be important.

“Negotiation and facilitation skills are something I have learned in my classes,” Koroma said. “And the [internship was] an opportunity for me to put that into practical experience.”