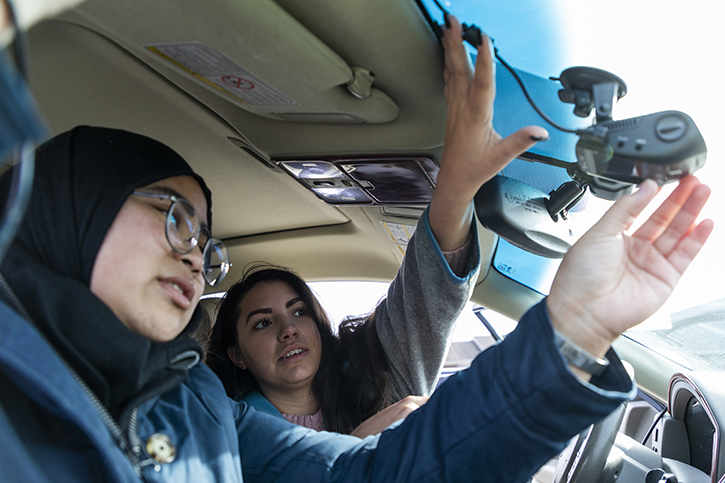 Graduate student Nada Adibah and senior Gabriella Cuevas demonstrate the installation of air pollution monitors in a vehicle. The students are working with Dr. Jenna Krall, assistant professor of global and community health, who is leading the data collection portion of a multidisciplinary study between the College of Health and Human Sciences, the Volgenau School of Engineering and the College of Humanities and Social Sciences looking at the effect of traffic pollution exposure on women's health. Photo by Lathan Goumas/Strategic Communications.

There are a number of things you could be thinking about during your commute, from the day’s agenda to what podcast to listen to. For a few George Mason University professors and students from the College of Health and Human Services, the Volgenau School of Engineering and the College of Humanities and Social Sciences, a less common topic is front of mind: the effects of traffic pollution on women’s health.

In a project funded by a Provost’s Multidisciplinary Research Award, the team is measuring women’s exposure to traffic pollutants during their commutes.

“This is one of the first studies to look at women commuters,” said Jenna Krall, an assistant professor of global and community health who is leading the study’s data collection. “The reason this project is focusing on women specifically is because there has been recent research indicating that pollution exposures during pregnancy may lead to adverse health outcomes.”

“If women do have higher exposure to traffic pollution while they are commuting, [that may influence] ways to think about maternity leave, for example, [and] different policies that can be set in place,” said Nada Adibah, a second-year master of public health student with a concentration in health policy.

This semester marks the project’s data collection phase, which involves setting up commute and pollution monitors in the personal vehicles of women commuters. The pollution monitors measure fine particulate matter—an air pollutant that can be at high levels near roadways and becomes a health concern when it enters the body.

Adibah has been heavily involved in recruiting study participants and has been working in the lab to change out the monitor filters. She’s one of several graduate and undergraduate students taking an active role in data collection and lab work.

“Working collaboratively on a cross-disciplinary research project has helped me feel more connected to the Mason community,” said Jenny LaFreniere, a master’s student studying human factors and applied cognition. “I feel fortunate to be a part of research that has the potential to affect so many people.”

LaFreniere said she feels the experience has been a great asset to her education and appreciates working with others outside her discipline—something she knows will be required of her as a human factors researcher.

The cross-disciplinary work will continue into future semesters, too. After collecting pollution exposure measurements, Mason experts in psychology and reproductive epidemiology will analyze the data, and engineering faculty will help the team develop technology based on the findings.

The team hopes this study will facilitate future studies to estimate the effects of traffic pollution on pregnancy-related health outcomes, such as low birth weight in newborns. 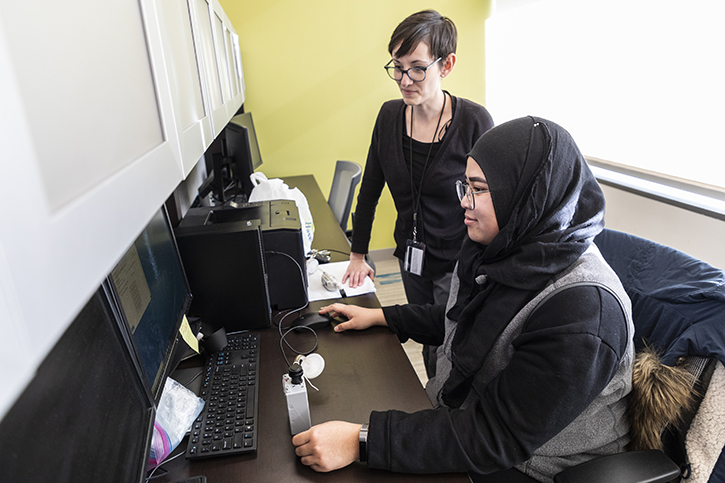