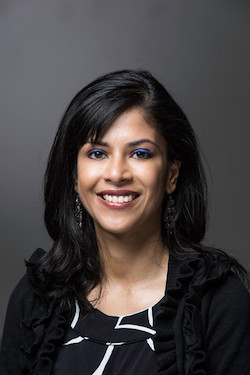 During the summer of 2018, six undergraduate students conducted surveys with patients at the Mason and Partners (MAP) clinics, free clinics that primarily serve immigrant and refugee communities in Northern Virginia. ​

They surveyed women who were between the ages of 18 and 49 and born outside of the United States about their experiences with gender-based violence, as well as other potential stressors such as exposure to anti-immigrant sentiment, threats to safety and perceptions of community connectedness.  ​

"This is the first step of a much larger initiative that we hope to develop with immigrant and refugee communities here in Northern Virginia,” said Gupta. “The local data that we collect can ultimately guide interventions.”​

Nursing professor Rebecca Sutter, who also serves as co-investigator on the project and director of the MAP Clinics, said the well-trusted nurses at the clinics could serve as a way for women to find resources such as violence prevention programs and support groups. ​

During the interviews, students asked questions about what type of interventions the women would want to see and provided them with resources to seek legal help if needed. ​

“I initially thought there would be a lot of hesitancy from the participants,” said senior public health student Zahra Hamidaddin. “But we found that they were actually very open. A lot of times at the end of the interviews, they would say they were appreciative that someone would listen to their story, because they haven’t been able to open up to anyone else.” ​

“Often women are very isolated and are unable to discuss their experiences due to fear or stigma,” said Gupta. “Health care providers can play an important role in providing support.”​

Karina Escobar is a first-generation American and a senior majoring in community health. Escobar said that before they conducted the field research portion of their project, the students received intensive training on research ethics, how to build a good rapport with study participants and how to effectively administer a survey.​

"We role-played many different scenarios, so that increased our confidence for our actual fieldwork,” said Escobar. ​

Gupta has led similar projects in Mexico City, Nepal, and Côte d'Ivoire. For this study, she wanted to bring her work back home and research what can be done for the local immigrant community. The research was funded by a Summer Impact Grant from the Office of Student Scholarship, Creative Activities and Research (OSCAR).​

"We have an incredible team of undergraduate students. They come from different disciplines such as public health, education, creative writing, psychology and global affairs. This is important because solving complex challenges requires multidisciplinary approaches,” said Lisa Gring-Pemble, co-investigator and associate professor at the School of Business.​

Gupta said she was pleased the project has secured additional support beyond the summer for the research to continue. The team is also in the process of writing proposals to support next steps.​

“Given the climate that we're in now, where the rights of immigrants are under threat, addressing their health and safety needs to be a top priority.”​

The other undergraduate research assistants are College of Humanities and Social Sciences students Ruth Maul, Renata Aldaz and Maricielo Ampudia and College of Education and Human Development student Yareli Arellano.