Throughout the 90-minute event, Christopher referenced common usage of words that can undermine efforts to confront race and inequality. 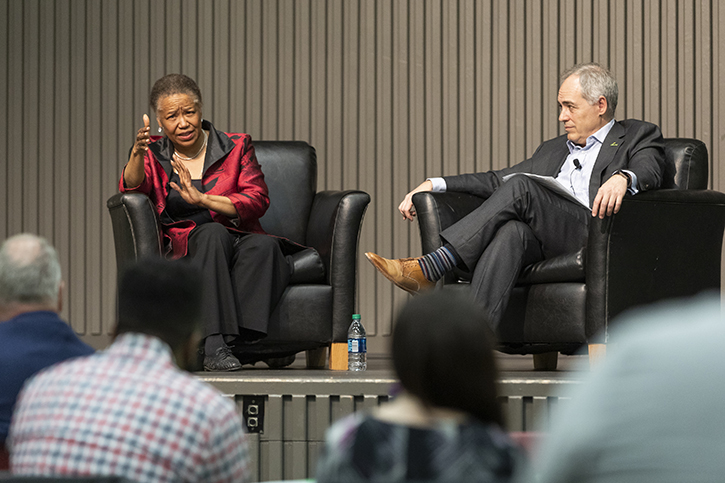 Social change advocate Gail C. Christopher dreams of a day when students will open a history textbook and read: “America once believed in a hierarchy of human value. But in the 21st century it came to grips with the absurdity of that notion and transformed into a nation whose systems and policies and practices valued all people equally.”

At a Freedom and Learning Forum on Monday at the Hub, billed as “Racism in Virginia and Opportunities for Change: Moving Toward Truth and Transformation,” Christopher said that we as a nation must confront and “unlearn” the embedded belief in that hierarchy and work to replace it with an understanding and awareness of human interconnectedness.

Then, and only then, might her dream textbook introduction become a reality.

“I believe it is the work of our generation, the work of this century, to jettison the belief and the permission to believe in a hierarchy of human value and replace it with what Einstein described as our sacred interconnectness to all of nature, but particularly to one another,” said Christopher, former senior advisor and vice president of philanthropic organization the W.K. Kellogg Foundation.

Christopher, who designed a Truth Racial Healing and Transformation plan to address the historic and contemporary effects of racism and in 2017 launched the Ntianu Center for Healing and Nature, emphasized during the forum that attaining equality requires authentic connections of empathy and understanding. That’s why she is disappointed by both the “superficial” responses from celebrities and public officials when they are embroiled in racial controversies and the critics more interested in denouncing the person than in dissecting the origin of the behavior.

“We have to take these opportunities to do the work,” Christopher said. “Truly examine where are we, how did we get to where we are and how do we go forward together. But I’m afraid with all of the extreme responses, nothing good will come from this moment when so much good could come from it.”

That point registered with forum attendees, including Ayanna Hairston, a sophomore accounting major from Milwaukee, Wisconsin, and Ana Teresa, a sophomore social work major from the Los Angeles area.

“On the political side, I think we definitely need to begin to stop sweeping it under the rug but look at it and accept that it already happened and how do we move on from it and move forward,” Hairston said.

It’s about “self-acceptance and realizing where you’ve made a mistake and recognizing that and growing from it,” Teresa said. “Because I think a lot of times people try to hide it and just move on. But you have to go back and figure that out so you can grow as a person and help the community.”

Christopher cited the Enslaved People of George Mason project as an example of changing the narrative around race by drawing in voices and perspectives that have not been heard. When asked by President Ángel Cabrera about a course Mason faculty are developing around diversity, inclusion and freedom of speech, Christopher emphasized the importance of student involvement in the process and the need for course organizers to participate in a shared racial healing experience that will build trust and appreciation, which will in turn be reflected in the course.

Damian Garcia, a sophomore criminology major from North Bergen, New Jersey, asked Christopher for advice on how he can engage his Phi Kappa Sigma fraternity brothers on matters regarding race and equality. She encouraged Garcia, the betterment officer in his fraternity, to form a small committee with likeminded members, acknowledge and contextualize the organization’s history, and plan a visioning activity for the broader group.

“I definitely believe that they would be open to this,” Garcia said after the forum.

Christopher’s appearance at Mason marked the university’s 10th Freedom and Learning Forum and second in a month. An event organizer said the plan is to continue to offer two each semester.

“I applaud this forum, this dialogue,” Christopher said early in her remarks. “This is what it will take to heal America.”