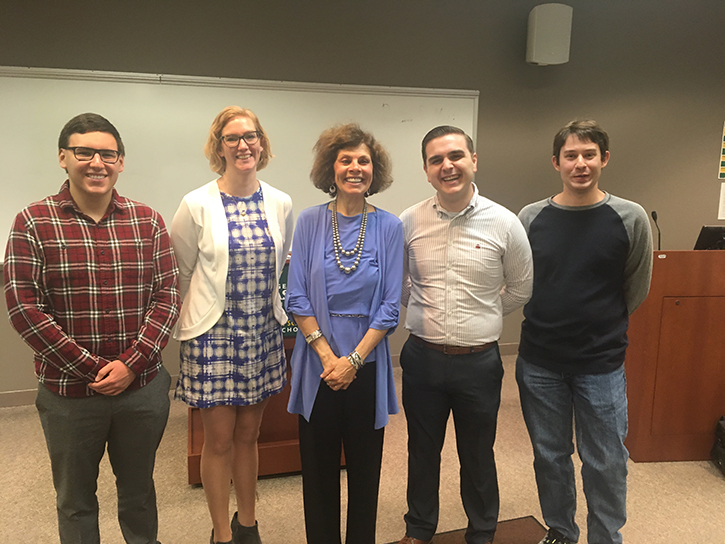 Students poring over textbooks in the library may be one image that comes to mind when thinking of law school, but for students in George Mason University’s Free Speech Clinic at the Antonin Scalia Law School, their experience is also highly interactive.

“The students work on actual cases in order to get academic credit, which is great because they get hands-on experience and it’s not like a classroom assignment,” said JoAnn Koob, director of Mason’s Liberty and Law Center. “It actually affects people.”

The year-long clinic allows students to work with practicing attorneys and their clients on cases where freedom of speech may have been infringed upon.

Many cases are in areas currently underrepresented by free speech advocates, so students have the opportunity to make an impact, Koob said.

In one ongoing case, a city police officer claimed it was obstruction of justice when a citizen, who was not suspected of any crime, refused to speak to the officer. The clinic’s first student cohort, which started in fall 2018, interviewed the citizen, reviewed documents and videos of the encounter, researched the legal issues involved and drafted legal memos of their research and discovery requests to the police department.

“Instead of simply taking an exam at the end of the semester, we are conducting legal research, drafting legal memoranda and speaking directly to clients,” said Ed Bailey, a third-year law student.

“It helps to bring the subject matter to life,” said third-year law student Katherine McKerall. “There is a lot of grey area [in First Amendment cases], and finding the right answer often means engaging with each and every minor detail of a case.”

The effort and engagement are worth it for a few reasons, said Koob, who’s been passionate about free speech ever since handling a free speech issue for her college newspaper when she was a student.

“Working on a case and going through all the different phases of it is very different than anything else you do in law school, because a lot of what you’re doing is learning the doctrine, but you’re not applying it,” she said. “The application is really important as a piece of the learning, and it will also better equip students to hit the ground running when they graduate.”

The second reason applies to everyone.

“All the freedoms that we have under the Bill of Rights, if they’re encroached upon, the only way we can defend against it is through speech,” Koob said.

She hopes the clinic can inspire students to be defenders of those freedoms.

In addition to working on cases, students benefit from networking opportunities and guest speakers.

This semester, the cohort has heard from Nadine Strossen, former president of the American Civil Liberties Union; Margie Phelps, who argued Snyder v. Phelps before the U.S. Supreme Court and Robert Corn-Revere, a leading lawyer who has worked on several First Amendment cases, including three at the U.S. Supreme Court.

“Getting to talk with First Amendment experts from all over the country has been amazing,” said McKerall. “They often have insights into the landmark cases because they were directly involved; that opportunity to pull back the curtain is something I could not have gotten anywhere else.”

Access to leading experts in the classroom and opportunities for high-profile connections in the heart of the nation’s political scene have made Mason a top destination for many students. Mason’s law program was ranked among the top 20 by Shanghai’s Global Ranking in 2018, and the Antonin Scalia Law School has been named a top 50 law school by U.S. News and World Report for years. Experiential learning opportunities like the Free Speech Clinic help make the Mason experience worthwhile.

“This has been one of the best courses I have taken in law school,” Bailey said. “It is a great way to get some great real-world experience while working on very important issues concerning the First Amendment.”