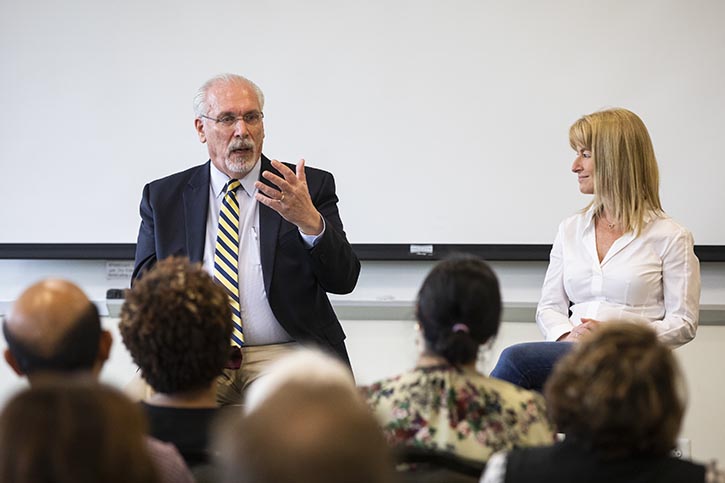 Richard DeMillo, Charlotte B. And Roger C. Warren Professor of Computing at Georgia Tech, talks about the creation of online education programs there with George Mason faculty and staff during a discussion lead by Michelle Marks, Vice President of Academic Innovation and New Ventures. Photo by Lathan Goumas/Strategic Communications.

A visiting Georgia Tech researcher said higher education must evolve to remain relevant for the needs of college students today and 20 years from now.

Speaking during a candid conversation with about 50 Mason faculty and staff members, Richard A. DeMillo, a Georgia Tech computing professor and director of the school’s Center for 21st-Century Universities, chronicled the path his university took in the past five years to expand online education in the form of affordable master’s degree programs in computer science, data analytics and cyber security.

“The experience has been pretty positive,” DeMillo said. “We’re serving people who wanted access, who were qualified to have access to education in computer science and—for whatever reason—were unable to get it.”

DeMillo and his staff made sure the program met all of the school’s rigorous academic standards.

“We put Georgia Tech logos on their degrees,” he said. “It doesn’t say ‘online.’”

Georgia Tech is now considering offering online undergraduate programs and could serve as a role model for schools looking to expand in that online educational space.

That’s important because demographic shifts mean that there will be fewer high school graduates as birth rates decline. DeMillo said the students of 2040 will be critical thinkers seeking to do something aspirational. They will also be less likely to live on a traditional college campus, instead seeking to live in a more diverse environment comprising people from every socioeconomic class.

Higher education will need to change with the times as well.

“It’s not just change for change’s sake,” said Michelle Marks, Mason’s vice president of academic innovation and new ventures. “It’s change because we’re thinking about being relevant to the student of 2040.”

DeMillo spoke for about 45 minutes before opening the floor to questions from Mason faculty members. Here are several of them:

Q. Do you think the stigma of an added online presence will hurt Georgia Tech’s overall brand?

A. DeMillo said he believes it’s very difficult to permanently damage an established university brand that has been long in the making, noting schools that have survived major recent scandals that drew scathing national headlines. Colleges that are established to their locales and that can accurately define their value will always remain relevant.

Q. How were you able to get the faculty on board?

A.  Georgia Tech employs an instructional model in which its online programs are led by tenure-track faculty. Additionally, DeMillo raised private funds to finance the school’s Center for 21st-Century Universities, allaying faculty fears that the expanded online presence would somehow drain resources for traditional programs. “That was a big breakthrough,” DeMillo said. “It tapped down a lot of resistance we might have seen.”

Q. How do you make sure academic standards are upheld?

A. It remains a work in progress, but each traditional course is specifically replicated for online delivery, DeMillo said. Student performance is closely tracked in the online classes relative to performance in traditional classes, with changes being made when necessary. Some online courses have been shut down in midstream when deemed not up to par for stringent Georgia Tech standards, DeMillo said. Students move forward in their academic progress at their own pace.