On TV and in the classroom: Star finance student reaps great returns at Mason 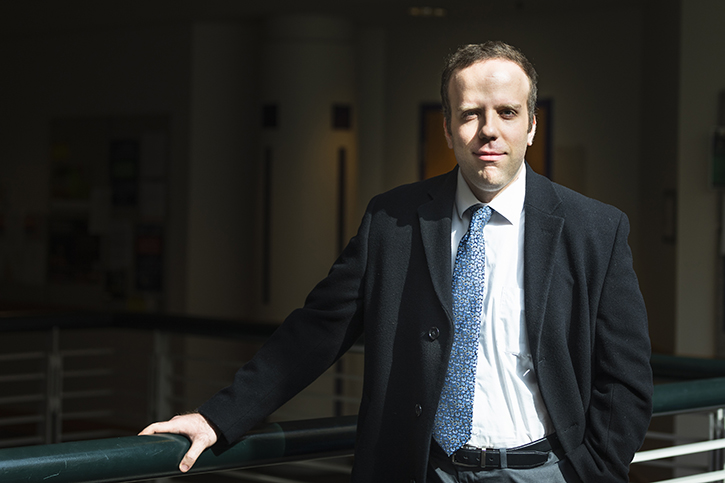 During his freshman year, Ali Kahil told his professor he’d be late to his 3 p.m. class, but he didn’t specify the reason. When he arrived 30 minutes later, he sent the professor a link: It was Kahil speaking on CNBC just an hour earlier, giving stock recommendations.

It’s no surprise that Kahil, now a senior majoring in finance at George Mason University, was selected to give stock advice when CNBC reached out on Twitter asking investors to come on the show.

“I’ve always had a natural interest in finance,” said Kahil, who recently earned a scholarship for a finance essay he wrote for the Motley Fool.

The Northern Virginia native started reading the Wall Street Journal when he was in middle school and gave successful stock predictions to family members. He went to his local brokerage firm the day before he was legally allowed to trade to get his paperwork ready, he said.

“What’s rewarding about finance is being able to see what you can do with it—being able to create not just wealth, but success, and to be able to enable other people’s dreams and aspirations to come true,” Kahil said.

As for his own aspirations, Kahil is still deciding which area of finance to go into after graduation. Whatever he chooses, he believes his professors and classes at Mason have helped him expand his knowledge and leadership skills.

“I was so taken by how [accounting professor Eugenia Tsirigotis] approached her learning style,” Kahil said. He had previously dropped out of an accounting course, but he said that Tsirigotis made sure her students understood the material. “I went from not being able to take accounting at all to getting [a high grade] in the class.”

Some of his other influential professors include Shelly Canterbury, who further sparked his interest in firm valuation; Jay Jayamohan, who guided Kahil and his classmates in Mason’s business case competition, where they won second place; and Derek Horstmeyer, who recognized Kahil’s ability in finance and chose him to be the vice president of the investment committee for Mason’s Student Managed Investment Fund, he said.

“[Kahil] is an incredibly earnest and hardworking individual,” Horstmeyer said. “He genuinely loves learning about finance, and not just as a prerequisite for a job.”

Mason’s location near the Washington, D.C., area, with a high concentration of financial firms and institutions, has also prepared Kahil for the workforce. He worked part time as a financial analyst at a nonprofit in Alexandria, Virginia, and landed an internship at Buckingham Strategic Wealth, a nationally ranked wealth management firm.

“[Kahil] has a strong future in finance in whatever capacity he does,” Horstmeyer said. “I keep hearing good things from his current boss for his internship.”

During the summer, Kahil will collaborate with Horstmeyer to come up with future guest speakers for a Mason finance course. The opportunity to contribute to something that directly helps other Mason students is “the ‘cherry on top’ of my academic career,” he said.