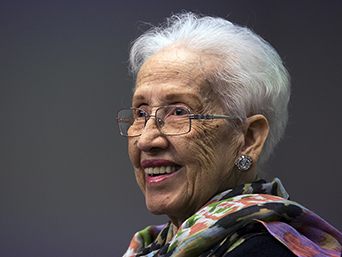 George Mason University will rename the largest building on its Science and Technology Campus in honor of former NASA mathematician Katherine G. Johnson, who as an African American woman overcame racism and sexism to help lead the United States into a new era of space exploration.

The dedication ceremony is set for 11 a.m. June 19 in the Verizon Auditorium in Colgan Hall on the Science and Technology Campus in Manassas, Virginia.

Johnson, who worked at NASA Langley Research Center in Hampton, Virginia, for 33 years, performed complex calculations and flight path analysis for U.S. spacecraft in the early years of the space program, including for the Apollo 11 flight to the moon in 1969. Her trailblazing achievements were highlighted in the 2016 Oscar-nominated film “Hidden Figures.”

Katherine G. Johnson Hall will be the new name for the former Bull Run Hall. Mason also will create a scholarship in Johnson’s name.

“Katherine G. Johnson Hall will be a powerful symbol of what can be achieved, no matter the obstacles, when students of all backgrounds are given the opportunity to succeed,” said Mason President Ángel Cabrera, one of the dedication ceremony speakers. “Katherine Johnson represents the idea of striving to fulfill one’s full potential. Her name on this building, and her remarkable story, will inspire future generations of scientists and engineers of all backgrounds.”

Johnson, 100, has NASA facilities named in her honor and received the Presidential Medal of Freedom in 2015.

"We hope renaming the building on the Science and Technology Campus after Katherine Johnson will be a constant reminder to encourage and inspire students, particularly those in the STEM fields, that anything is possible if you work hard and are prepared,” said Joylette Hylick, one of Johnson’s daughters.

Attracting more women of color to science, technology, engineering and math (STEM) degree programs is a priority across U.S. higher education, as well as for Mason, the largest and most diverse public university in Virginia. Mason produces more graduates in computer-related fields than any university in Virginia.