Lovejoy: Saving the Amazon is imperative in the fight against global climate change 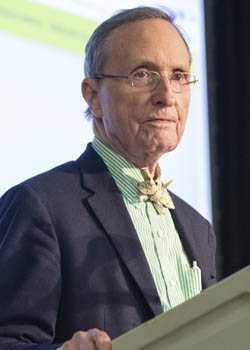 Thomas Lovejoy, a University Professor in George Mason University’s Department of Environmental Science and Policy and the scientific director for the Institute for a Sustainable Earth, says the raging fires in the Amazon rainforest will be the world’s problem if not soon addressed.

The fires follow an earlier report from Lovejoy and Brazilian scientist Carlos Nobre warning of the Amazon’s “tipping point” due to unchecked deforestation in Brazil, which has done little to curb things despite being home to about 60 percent of the Amazon.

“What is scary is that the Amazon makes half of its own rainfall through a hydrological cycle,” said Lovejoy, a conservation biologist who first coined the term “biodiversity.” “When we wrote [about the tipping point], we stated the Amazon is actually close to a tipping point. These fires seem hell-bent on tipping the tipping point, which is in nobody’s best interests.”

Often called the “lungs of the earth,” the Amazon is home to trees that release oxygen while annually taking in as much as 2 billion tons of carbon dioxide, the greenhouse gas that contributes to global warming. The region is also home to about 20 percent of the earth’s plant species, many of which are found nowhere else.

“Action No. 1 should be to restore enforcement and send the right signals about the importance of conserving the Amazon forest,” Lovejoy said, “for its intrinsic values, its role in the global carbon cycle and its amazing store of biodiversity.”

George Mason University is Virginia’s largest public research university. Located near Washington, D.C., Mason enrolls 37,000 students from 130 countries and all 50 states. Mason has grown rapidly over the past half-century and is recognized for its innovation and entrepreneurship, remarkable diversity and commitment to accessibility.