Check out an REU student video 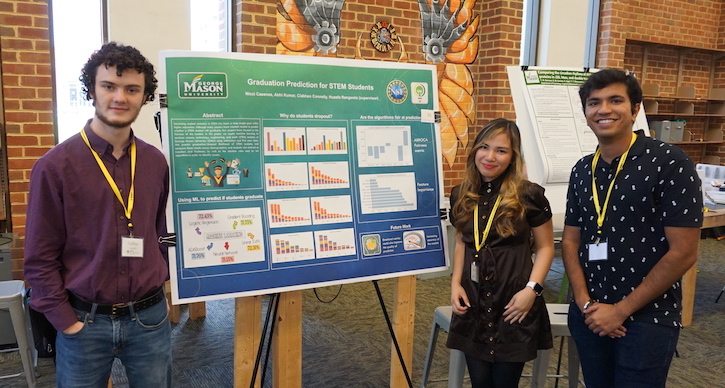 The student participants, majoring in computer science, statistics and the social sciences, ranged from rising sophomores to rising seniors. They came from universities across the country including Arizona State, Yale, Baylor, and Indiana. Three were from Mason.

Upon arrival, the student researchers went through a two-week bootcamp to help them get up to speed on practical data science. The training included a hackathon and introductions to Python programming and data visualization techniques, among other topics. Rangwala and Snyder also prepared some ideas for research projects for the students.

“We didn't give them specific tasks like a course assignment,” said Rangwala, who teaches in the Department of Computer Science. “It was more like, ‘Here are the kinds of questions we're interested in. Here's the kind of data we have.’ We did let them find their own projects and research questions.”

With Snyder as their mentor, Mason computer science major Peter Cherniavsky and Noah Hunt-Isaak from Dickinson College used class data from sections of CS 112 Introduction to Computer Programming to predict student performance. The goal of the data mining project was to develop an early warning system for students at risk of failing and promote student success.

Two other groups, mentored by Rangwala, were also looking at student success, including factors that affect STEM major graduation and retention rates at Mason.

In addition to the technical and analytical skills the students were using for their project, the REU also included some training in research communication skills. The students were expected to prepare a three-minute talk, a paper, a poster, and a short video on their projects.

“I was really blown away by the videos that they prepared,” said Rangwala. “They really put a lot of time into them.”

Nearly 160 applicants competed for this year’s REU. The summer program is supported by a three-year grant so Rangwala and Snyder will get to do it all again next year.

“[The REU] helps gain visibility for Mason. Personally, we like to work with undergrads, and this is a good opportunity,” said Rangwala. “These are highly motivated students, and we have a chance at making an impact. Our hope is that they go to graduate school—and maybe they apply to Mason.”