Two Mason alumnae known for their transformative work will be the featured speakers at the 2019 Winter Graduation ceremonies at EagleBank Arena on Thursday, Dec. 19.

Zainab Salbi, BIS ’96, is a humanitarian and author who founded Women for Women International, an organization that offers various supports and skill development to women survivors of war.

Deborah Willis, PhD Cultural Studies ’03, is University Professor and chair of the Department of Photography and Imaging at the Tisch School of the Arts at New York University. Willis is a photographer and curator and the author of several books, many that illuminate the African American experience throughout history.

Salbi served as CEO of Women for Women International from 1993 to 2011, assisting women in conflict areas. The human rights activist has expanded into journalism, creating and hosting such shows as “#MeToo, Now What?” an original PBS series about sexual harassment, and “Through Her Eyes,” a Yahoo News show devoted to female perspectives. Foreign Policy magazine in 2016 named Salbi as one of the “100 Leading Global Thinkers.”

Cited by Oprah Winfrey as “one of the bravest women I know,” Salbi is the author of several books, including “Between Two Worlds: Escape from Tyranny: Growing Up in the Shadow of Saddam.” Her latest book is “Freedom Is an Inside Job: Owning Our Darkness and Our Light to Heal Ourselves and the World.”

At the 10 a.m. ceremony, Salbi will address graduates of the College of Humanities and Social Sciences, College of Science, Schar School of Policy and Government, Antonin Scalia Law School and the School for Conflict Analysis and Resolution. 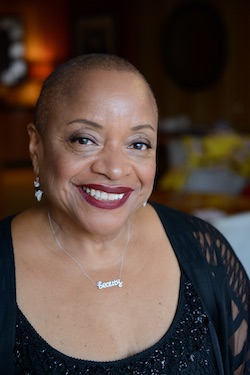 Willis’s work explores the photographic history of slavery and emancipation, the black body and contemporary African American life. She has exhibited her own work and curated other exhibits in galleries and museums across the country, including at the Smithsonian Institution.

Director of the NYU Institute of African American Affairs and Center for Black Visual Culture, Willis received the John D. and Catherine T. MacArthur Fellowship in 2000. She also was a Richard D. Cohen Fellow at the Hutchins Center for African and African American Research of Harvard University, in addition to being a John Simon Guggenheim Fellow and an Alphonse Fletcher Jr. Fellow.

Willis has received two NAACP Image Awards for Outstanding Literary Work. Books she has authored or co-authored include “Posing Beauty: African American Images from the 1890s to the Present,” “Envisioning Emancipation: Black Americans and the End of Slavery,” and “Michelle Obama: The First Lady in Photographs.”

At the 2 p.m. Winter Graduation ceremony, Willis will address graduates of the School of Business, College of Health and Human Services, College of Education and Human Development, Volgenau School of Engineering and the College of Visual and Performing Arts.