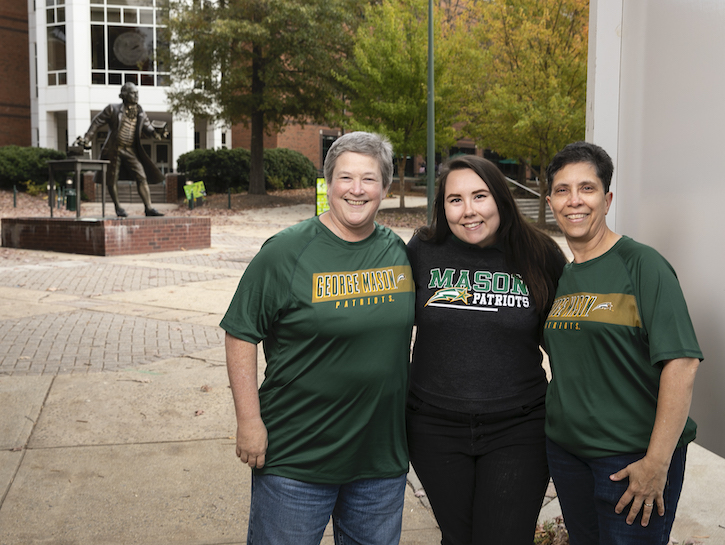 George Mason University junior Abby Butler-Cefalo’s family is not the average one, but their bond is strong. This year, her family will receive the ninth annual Alan and Sally Merten Family of the Year Award at Mason’s Family Weekend on Nov. 8-10.

“When I first came to Mason, everyone talked about their moms and dads, and there was never really any space for nontraditional families—even in our bookstore [which sells family items branded for ‘mom’ or ‘dad’],” said Butler-Cefalo, who was adopted by two women whom she calls parents and refers to as Aunt Sue and Aunt Trish. “Winning Family of the Year really makes me feel acknowledged that our family is just as legitimate as any others.”

Through thick and thin, the Butler-Cefalos have stuck together. When Butler-Cefalo, a member of the Honors College, wanted to switch majors from government to social justice and human rights, she was very anxious to tell her parents, but “was immediately met with approval,” she said.

Their supportiveness was evident in times of challenge, too.

During Butler-Cefalo’s second year at Mason, her Aunt Trish was diagnosed with breast cancer. Aunt Sue was the primary caretaker, but when she wasn’t available, Butler-Cefalo went home to take her to chemotherapy.

“It was definitely hard,” said Butler-Cefalo, who said she had to miss some classes to travel home to Alexandria, Virginia.

“I would bring my laptop and work on school work during her appointments to try and keep everything balanced,” Butler-Cefalo said.

While Aunt Trish was battling breast cancer, she was also a doctoral student. The support from her family “kept me motivated to get better so I could live,” Aunt Trish said.

“Seeing my parent work so hard to not only fight cancer, but also graduate empowered me to do better and work just as hard in school,” Butler-Cefalo said.

The stressful times Butler-Cefalo has faced in college—including dealing with the loss of her grandfather and her uncle’s health weakening—have made the family closer, she said.

“Dealing with loss and diagnoses and other traumas showed us that life is too short to hold grudges or argue over things,” Butler-Cefalo said.

“Family is who you lean on through the rough times and who you want to celebrate with during the happier times,” Aunt Trish said.

The trio will be together at the upcoming Family Weekend, where they look forward to attending a Mason basketball game for the first time and enjoying a wine and cheese event Butler-Cefalo helped organize as a student coordinator in the Office of New Student and Family Programs, they said.