Susan Rice and David Petraeus on the benefits of public service 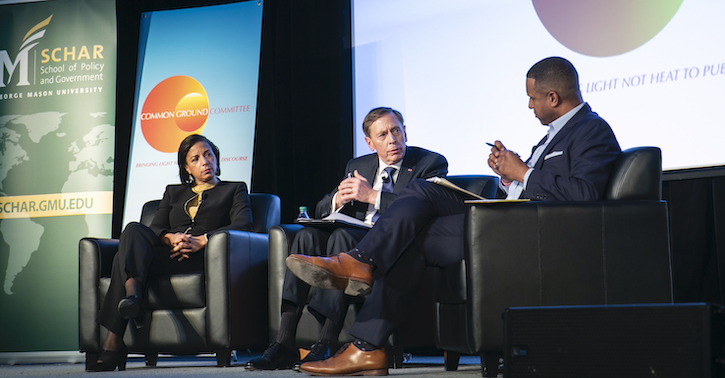 The 90-minute conversation was moderated by Today show host and MSNBC correspondent Craig Melvin, who engaged the panelists in topics including China-Russia relations and Turkish aggression, as well as the recent pullout of U.S. troops in Syria and the idea of mandatory national service.

Petraeus enumerated five reasons the United States should keep forces in Syria, among them to achieve “a sustained commitment” to the region. Rice pointed out that the Kurdish population of Syria, which saw 10,000 casualties in fighting as an ally against the Islamic State, was an abandonment that allowed Turkey to invade with Russian assistance. 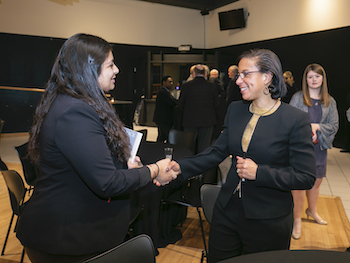 Prior to the forum, Susan Rice and Gen. David Petraeus met with 17 Mason students, many of them government and international politics majors. Photo by Ron Aira/Creative Services.

“We gave a moral commitment we would not abandon them, and we did,” Rice said. “What local forces are going to partner with the U.S. now?”

Rice suggested that mandatory national service—either civilian or military—would serve to “bring people together. The doubt, fear, and hate, the distrust that divides us so profoundly starts us to doubt our institutions and our democracy.” By serving the country, she said, “at age 18 to 22, for 6 to 12 months, all races, all religions, everyone would have to work together for the common good. They have to know each other.”

The suggestion was met with widespread applause.

When the discussion was concluded, each audience member received a free copy of Rice’s new book, “Tough Love: My Story of Things Worth Fighting For.”

Prior to the conversation with Melvin, Rice and Petraeus met with 17 Mason students, many of them government and international politics majors. In addition to addressing civility in public discourse, the guests described their own career paths and made detailed recommendations for those thinking of entering public service. Larry Pfeiffer, director of the Schar School’s Michael V. Hayden Center for Intelligence, Policy, and International Security, hosted the session.

Despite the current political climate, Rice began, “if you are thinking of a life in government, please do. It is the most rewarding, challenging, gratifying, but frustrating—in the right way—thing you can do on behalf of your country. You will meet and work with incredibly smart people who are working for the same thing as you.”

Rice also advised students that getting a graduate degree would help them to advance in government service.

Petraeus encouraged the students to double down on their studies. “Your academic preparation is important. What you do academically sets you apart, it distinguishes you.” He also advised them to strengthen their analytical and communication skills.

Students were impressed to have access to such high-profile guest speakers.

“This was exceptionally cool,” said sophomore government and international politics major Erica Kelly. “One of the reasons I chose George Mason is its proximity to Washington, D.C., and the connections the faculty have—it’s exciting to see that bear fruit. I’m very proud that the university I attend brings in speakers like this.”

“The fact that our school carries enough weight to bring in members of the federal government with high public profile positions is an asset to us,” said sophomore government major Ian Waite. “To do it in a question-and-answer, very personal setting, was amazing.”