In 1991, Chadra Pittman and Candice Ferreira moved into George Mason University’s Patriot Village because neither of them wanted a roommate.

Twenty-nine years later, they found themselves on the red carpet with actress Tiffany Haddish at a VIP screening of the movie “Like a Boss” after winning a national best friends contest on “Good Morning America” (GMA).

“We've shared so many moments, and we've literally grown up together,” said Pittman, BA Anthropology ’95.

“A lot of friends come and go out of each other’s lives,” said Ferreira, BA Communications ’92.

“We have never not been in each other's lives,” Pittman and Ferreira said simultaneously. 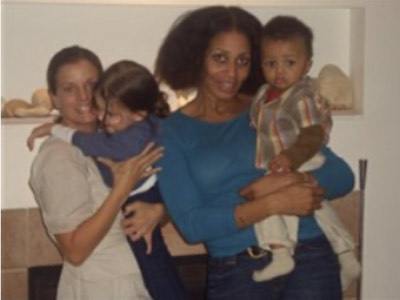 Ferreira (left) and Pittman, with their children. Photo provided.

When Pittman and Ferreira came to Mason they opted to stay in Patriot Village, which allowed students to have their own room with a shared bathroom between the rooms.

“Later in the day, we opened the bathroom door to each other and sparks flew,” said Ferreira.  “The irony is that for the two people that absolutely didn't want to be bothered with anyone, we became totally inseparable. The door was open the whole time, and we just could not get enough of each other.”

Over the years, the two have been with each other through breakups, career changes, cross-country moves and growing families, and they said they have never have had any conflicts because, despite some of their differences, they just click. Distance, relationships, and time have not been able to pull the women apart.

When Ferreira saw a promotion on GMA for the “Like a Boss” movie contest that asked contestants for a one-minute video about their “ride or die” best friend, she decided they should enter. When the friends met in Richmond, Virginia, to catch up, a halfway point for Pittman who lives in Hampton and Ferreira who lives in Washington, D.C., after not seeing each other for two years, they recorded their video.

After passing the first rounds of phone interviews, they were invited to New York City as “finalists”—not knowing they’d already won the competition. Haddish and GMA host Robin Roberts congratulated the two on live television.

Their kids were happy for them. Ferreira’s daughter, Mila, 15, and Pittman’s sons, James, 13, and Chaden, 11, said it was cool seeing their mothers winning a big contest on television.

The next day, they were on the red carpet, shoulder to shoulder with Haddish at a VIP showing of her movie at the AMC in Georgetown, a location the friends chose, with their friends and family. Haddish described their relationship as “the epitome of what friendship should be.”

“From the moment we met Haddish in New York City to when we walked with her hand in hand on the red carpet for the premiere,” Pittman added. “She was so kind and welcoming toward us.”

Pittman and Ferreira said they are still in shock that they won and watch the videos together because it feels so surreal.

Pittman said that she kept telling Ferreira before they won that, despite whoever was picked, they were already winners.

“We get an all-expense-paid trip to New York together, which is home for me and where we lived together after college,” said Pittman.

Both Pittman and Ferreira said that everyone, from GMA to Paramount, was very kind and gave them royal treatment.

“We are so grateful that we were chosen as the winners and now,” they said in a joint statement. “Thanks to GMA and Paramount, we have another wonderful memory in this 29-year friendship that we will cherish forever.”