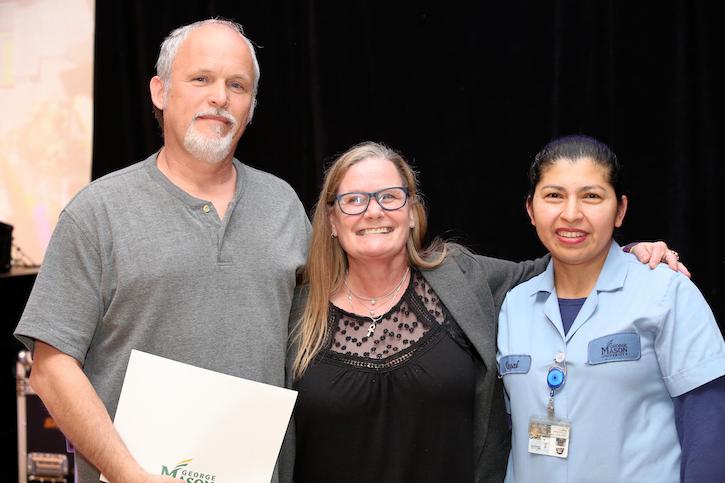 Two George Mason University staff members, one in housekeeping and one in facilities, have received the first annual Goldie Hattery and Diane Hattery Awards for Excellence.

The awards were given to Keith Wallace from Facilities Management and Martha Rodriquez from Housing and Residence Life Housekeeping during the university’s faculty and staff holiday party in December.

The awardees were selected through a nomination process. In his nomination, Wallace is described as an employee who goes above and beyond to help his team in university events and all other offices on campus. A true member of the Mason community, Wallace is the first one on campus and the last to leave during graduations, nominators noted.

Rodriguez also was recognized for being a team player who supports her colleagues and shows leadership skills. This past year, Housing and Residence Life updated the process of timekeeping from paper-based time cards to digital. Rodriguez went above and beyond to help her colleagues learn how to use digital timesheets. She also assisted them in IT security training by providing translations and answering questions.

The awards stem from a project that Angela Hattery, along with Wendi Manuel-Scott and Lisa Snyder, worked on together. “A Seat at the Table” involved hearing the concerns and checking on the well-being of classified staff in such positions as housekeeping and facilities. Hattery said a few suggestions concerning recognition for their work stuck with her.

"Until now, there has not been a good way to recognize their hard work," said Hattery, director of the Women and Gender Studies program at Mason. "At Mason's annual Outstanding Achievement Awards, there are now several awards for faculty and staff, and I saw an opportunity for these kinds of jobs to receive more of the recognition they deserve."

The Outstanding Achievement Awards celebrate the hard work, dedication and achievement of Mason’s faculty and staff. The Goldie Hattery and Diane Hattery Awards for Excellence, which dedicated to and named after Hattery’s grandmother and mother who recently passed away, specifically highlights classified staff in facilities and housekeeping. The award is given through the College of Humanities and Social Science’s Women and Gender Studies program.

"They had a lot of attentiveness to people who do the work that really matters but always goes unrecognized," said Hattery. "I felt like this was a nice way to honor them."