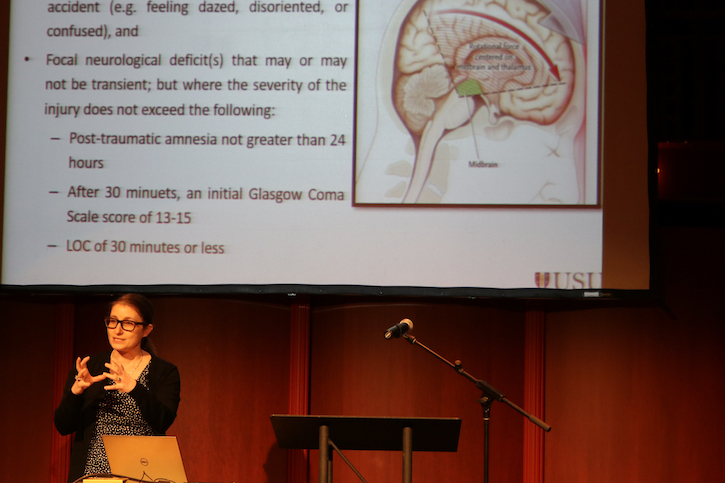 Presenter Dara Dickstein, assistant professor at Uniformed Services University, describes what happens to the brain during a head injury in the Feb. 18 Galileo's Science Cafe. Photo provided by University Life.

“Think of a peach,” said Dara Dickstein, assistant professor at Uniformed Services University, when describing what happens to the brain during a head impact. “If you put it in a container and shake it, it’s going to get bruised.”

Dickstein explained to the audience at the Feb. 18 Galileo’s Science Café that the shaking of the brain causes the ends of the brain cells to shear off, almost like snapping dry twigs. When these neurons are injured and die, the results can include unconsciousness, memory loss, confusion and dizziness.

While concussion and TBI are often discussed in the context of sports impacts, Dickstein highlighted that these kinds of brain injuries can have many causes, from improvised explosive devices (IEDs) during military service to domestic violence.

College of Science professor Chip Petricoin, co-director of the Center for Applied Proteomics and Molecular Medicine, also presented on his work toward taking subjectivity out of the concussion diagnosis equation. His team looks for biomarkers of brain injury in the saliva of young athletes by monitoring them throughout the season. The goal of the research is to one day have a TBI test that simply requires testing someone’s saliva.

During questions from attendees, both Petricoin and speaker Sgt. Tom Bates, who is living with CTE after multiple deployments, suggested that TBI is a complicated issue. Petricoin said that athletes may not consent to testing because getting pulled from the field in the event of a concussion could damage their careers and cost them their paychecks. Bates thought that soldiers may not want to be tested either, because leaving the front lines means that someone else has to take their place and they would have to leave their team.

In addition to the dialogue, the event had several exhibitors, including Coming Home Well, Nova Veterans Association, Virginia Department of Veteran Services, Mason's Center for Psychological Services and the Medical Technology Enterprise Consortium (MTEC), and was sponsored by Mason’s Institute for Biohealth Innovation.

Sina Gallo of Mason’s College of Health and Human Services will speak on "Combatting Pediatric Obesity to Promote Healthy Futures in the Latino Community" on May 6.

All cafes take place in the Hylton Performing Arts Center on Mason’s Science and Technology Campus. To learn more about the events and to RSVP, visit capmm.gmu.edu/galileo-sciencecafe.