He tries to pattern his game after his idol, the recently deceased former NBA star Kobe Bryant, so it shouldn’t come as a surprise that Chris Carter says he wants the ball in his hands at crunch time.

“Sometimes you just gotta be a dawg,” Carter said with a laugh, using basketball vernacular that refers to dominant players who always want to take any potential game-winning shot.

Carter, a George Mason University Special Olympics athlete and a 2016 graduate of the university’s LIFE Program within the College of Education and Human Development, will get his chance when he represents Mason at the upcoming NBA All-Star Weekend in Chicago by competing in the NBA Cares 2020 Unified Special Olympics Game.

He will be one of 12 athletes who will take to the floor at Wintrust Arena on Friday, Feb. 14, to compete in a game with and against a number of NBA and WNBA players and legends. Carter was chosen from among 34 applicants from seven countries.

Carter was selected after his coach, Emilio Alonso, nominated him last fall and shared a video showcasing Carter’s multifaceted skills and ebullient personality. 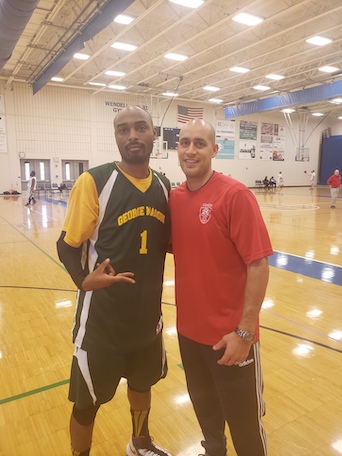 The 6-foot-1, 165-pound guard led his Special Olympics GMU Gold Rush team to its first Division I state gold medal in 2016. Now he’s looking forward to being a part of the annual NBA All-Star extravaganza.

“It’s a great honor,” said his mother, Renee Carter. “It’s something he’s always talked about. And it’s great for any parent to see their children have their dream come true.”

Carter comes by his skills naturally. His father, Brenner Carter, played at Virginia State and later coached both Chris and his brother Marcus, a former player at Division III Christopher Newport University.

Alonso has been involved with the local Area 26 Special Olympics program for 12 years and says that Chris Carter is the best player he’s seen come through. He averaged 25 points to go along with roughly three assists, seven rebounds and two steals per game so far this season.

“His ability to make his whole team better is unlike anybody else I’ve seen in Special Olympics,” Alonso said. “He’s a huge part of what we do. He makes the whole team better. His game speaks for itself.”

Carter had never heard of Special Olympics until his arrival at Mason in 2012, but was quickly sold while playing basketball and soccer.

Each athlete gets a meet-and-greet with members of the NBA and tickets to events throughout the week.