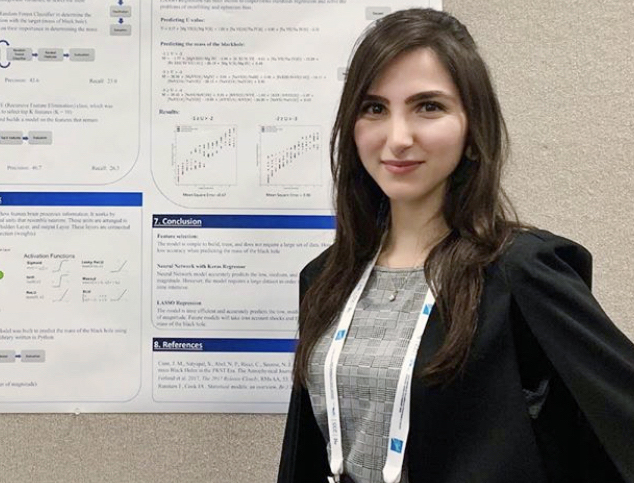 Mason alumna and current physics major Lara Kamal has been named a 2020 Goldwater Scholar for her commitment to STEM research. Photo provided.

Lara Kamal didn’t originally pursue her dream of becoming an astrophysicist. Initially, she chose what her family thought was a practical career, and graduated from George Mason University in 2018 with a degree in computer science.

Soon after, though, Kamal realized she wanted to follow her true passion. Kamal is considered a nontraditional student because she returned to Mason to study physics.

At Mason, Kamal used her understanding of data mining to research the best tools for studying supermassive black holes. In March she was named a 2020 Goldwater Scholar for her commitment to STEM research. Her research contributed to Mason’s Black Hole—Galaxy Connection Group.

Kamal said that she was “very honored” to receive the award from the Barry Goldwater Scholarship and Excellence in Education Foundation, which includes a $7,500 scholarship.

“My advice to other people is that if you have a passion in something, you should pursue it,” Kamal said. “You will work harder and good things will happen.”

Kamal believes that as an “Iraqi woman in science,” she has “the responsibility to inspire young girls to love and pursue science, especially girls in the Middle East who have the passion, talent and thirst for knowledge of science, but need guidance and inspiration to start a STEM-based career.”

Since 1989, the Goldwater Scholarship has been considered a preeminent undergraduate award specifically for students planning careers in mathematics, the natural sciences or engineering. The Goldwater Award is also considered a gateway for students applying to graduate schools and looking for research funding. Kamal is one of 482 students chosen out of a total applicant pool of 1,343.

To get the award, Kamal went through a lengthy application process with the help of Mason’s Office of Fellowships and Mason’s Goldwater Scholarship committee. In addition to submitting her academic transcripts and letters of recommendation, she wrote numerous essays explaining her career goals and research priorities.

Applying for a Goldwater scholarship is a “demanding process, but Lara was so responsive,” said Patty Granfield, head of the Goldwater Scholarship Committee and an instructor in Mason’s Department of Mathematical Sciences.

In one essay, Kamal discussed her background as refugee from Iraq. Her family fled Iraq to Syria, and then the United States. They landed in Washington state and then Northern Virginia, where she graduated high school. She recalled in her essay how looking at the stars in the night sky helped distract her from any anxiety she felt during the harder times in her life.

“Lara’s story embodies what makes Mason students so special,” Berger said. “Intellectual curiosity and academic drive even in the most adverse situations.”

Shobita Satyapal, a Mason physics and astronomy professor and Kamal’s research advisor, said that Kamal already conducts herself “as a mature researcher.”

“She’s so motivated and genuinely interested in her work,” Satyapal said. “I see her as making major contributions in the field of astrophysics.”

Normally, winning a prestigious award like the Goldwater scholarship would be cause for celebration. But, given the current social distancing circumstances, Satyapal got creative.

“We held a virtual party for her on Zoom,” Satyapal said. “We are just so happy for her.”